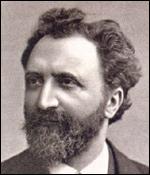 Gernsheim was born in Worms. He was given his first musical training at home under his mother's care, then starting from the age of seven under Worms' musical director, Louis Liebe, a former pupil of Louis Spohr. His father, a prominent Jewish physician, moved the family to Frankfurt am Main in the aftermath of the year of revolutions, 1848, where he studied with Edward Rosenhain, brother of Jakob Rosenhain.[1] He made his first public appearance as a concert pianist in 1850 and toured for two seasons, then settled with his family in Leipzig, where he studied piano with Ignaz Moscheles from 1852. He spent the years 1855–1860 in Paris, meeting Gioachino Rossini, Édouard Lalo and Camille Saint-Saëns.

His travels afterwards took him to Saarbrücken, where in 1861 he took the conductor post vacated by Hermann Levi; to Cologne, where in 1865 Ferdinand Hiller appointed him to the staff of the Conservatory (his pupils there included Engelbert Humperdinck and Carl Lachmund); he then served as musical director of the Philharmonic Society of Rotterdam, 1874-1890. In the latter year he became a teacher at the Stern Conservatory in Berlin, and in 1897 moved there to teach at the Prussian Academy of Arts, where he was elected to the senate in 1897. In 1877 he married Helene Hernsheim from Karlsruhe.

Gernsheim was a prolific composer, especially of orchestral, chamber and instrumental music, and songs. Some of his works tend to Jewish subject-matter, notably the Third Symphony on the legend of the Song of Miriam. His earlier works show the influence of Schumann, and from 1868, when he first became friendly with Brahms, a Brahmsian influence is very palpable. Gernsheim's four symphonies (the first of which was written before the publication of Brahms' First Symphony) are an interesting example of the reception of Brahmsian style by a sympathetic and talented contemporary. Gernsheim's last works, most notably his Zu einem Drama (1902), show him moving away from that into something more personal. He died in Berlin.

Due to his Jewish background, his work was banned in Nazi Germany, and his papers and a biography written about him by Karl Holl were removed from music libraries.[2]

Of these works, the symphonies, the cello concerto, the first cello sonata, the piano trios, two of the piano quartets, the two piano quintets, the violin sonatas,[17] and the second string quartet have to date been recorded.

This article uses material from the article Friedrich Gernsheim from the free encyclopedia Wikipedia and it is licensed under the GNU Free Documentation License.