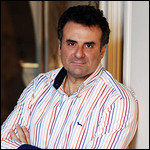 Marcello Giordani (birth name Marcello Guagliardo; born 25 January 1963) is an Italian operatic tenor who has sung leading roles in opera houses throughout Europe and the United States. He has had a distinguished association with the New York Metropolitan Opera,[1] where he has sung in over 200 performances since his debut there in 1993. (He is not to be confused with another Italian tenor, Massimo Giordano, who toured with Anna Netrebko in 2009.)

Marcello Giordani was born in 1963 in the small Sicilian town of Augusta. His father, a former prison guard, was the owner of a major gasoline station in the town, and his mother was a housewife. He showed a talent for singing at an early age and took private lessons in Augusta as well as singing in his church choir. When he was nineteen, he quit his job in a bank and moved to Milan where he studied voice with Nino Carta. Giordani made his professional operatic debut in 1986 as the Duke in Rigoletto at the Festival dei Due Mondi in Spoleto. His debut at La Scala came two years later when he sang Rodolfo in La bohème. He went on to sing throughout Italy and Europe, and in 1988, he made his American debut singing Nadir in Les pêcheurs de perles with Portland Opera, a company with which he frequently appeared early in his career. Engagements with several other American opera companies followed, including San Francisco Opera, Seattle Opera, Los Angeles Opera and the Opera Company of Philadelphia. Giordani made his Metropolitan Opera debut in 1993 as Nemorino in a Parks performance of L'elisir d'amore opposite Maria Spacagna as Adina. His first performance on the actual stage at the Metropolitan Opera House was on December 11, 1995 as Rodolfo to Hei-Kyung Hong's Mimì with Carlo Rizzi conducting.

In 1994, vocal problems which had begun to surface in the previous years became more acute. He began to retrain his voice with Bill Schuman in New York but did not cancel his engagements. In 1995 he sang Alfredo in La traviata at Covent Garden under Sir Georg Solti, whose guidance he credits as a great help in the rebuilding of his career. In 1997, Giordani again sang at Covent Garden under Solti (as Gabriele Adorno in Simon Boccanegra), in what turned out to be the final opera performances that Solti would ever conduct. His career at the Met, which had initially been sporadic, began to flourish. By the end of 2008 he had sung over 170 performances with the company, including the leading tenor roles in the Metropolitan Opera premieres of Benvenuto Cellini and Il pirata. He also sang in the Met's season opening performances in both 2006 (Pinkerton in Madama Butterfly) and 2007 (Edgardo in Lucia di Lammermoor), and on 18 September 2008, he was the tenor soloist in the Met's performance of Verdi's Requiem in memory of Luciano Pavarotti.

Giordani met his wife, Wilma, when he was singing in Lucerne in 1988. They married two years later. The couple and their two sons live in New York and Sicily.

This article uses material from the article Marcello Giordani from the free encyclopedia Wikipedia and it is licensed under the GNU Free Documentation License.

Felix Mendelssohn-Bartholdy Andante aus "Trois Fantaisies ou Caprices" Op.16
Update Required To play the media you will need to either update your browser to a recent version or update your Flash plugin.