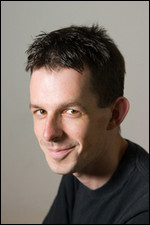 Iain Farrington (born 1977) is a British pianist, organist, composer and arranger. He performs regularly with some of the country's leading singers, instrumentalists and choirs, as well as giving solo recitals.

He studied piano at the Royal Academy of Music, London and was Organ Scholar at St George's Chapel, Windsor Castle and Organ Scholar at St John's College, Cambridge. As a solo pianist, accompanist, chamber musician and organist, he has performed at Wigmore Hall, Queen Elizabeth Hall, the Purcell Room, the BBC Proms, the Royal Opera House, and in the US, Japan, South Africa, and across Europe.

Farrington played the piano at the opening ceremony of the London 2012 Olympics with Rowan Atkinson (as Mr Bean), the London Symphony Orchestra and Sir Simon Rattle (and appeared as a runner in Mr Bean's dream sequence)[1] He has made two solo piano recordings featuring his own compositions and arrangements, Fiesta! and Piano Songs.[2][3] His solo performance in the Proms 2007 on the Royal Albert Hall organ was critically acclaimed.[4] In 2013 he featured as a piano soloist in Howard Goodall's 'Story of Music' on BBC Television.[5] He has performed the organ works of Schoenberg in concerts for the Schoenberg family in Los Angeles [6] At the Queen Elizabeth Hall, London he performed Ligeti's Continuum for solo harpsichord in 2012.[7]

As a composer, Farrington has written orchestral, choral and chamber works. His orchestral work Wing It was composed for the Wallace and Gromit Prom in 2012.[8][9] His choral work The Burning Heavens was nominated for a British Composer Award in 2010.[10] His organ suite, Fiesta!, has been performed extensively and recorded several times.[11][12][13] His organ work Animal Parade has been recorded and was featured at the 2011 Lord Mayor's Show in St Paul's Cathedral, London, with narration by Brian Blessed.[14][15]

Farrington has made numerous arrangements for orchestra, choir and chamber ensemble. He has made many arrangements of the music of Edward Elgar. His arrangement of Elgar's Pomp and Circumstance March No. 5 was performed at the 2011 Royal Wedding.[16] His other organ arrangements of Elgar have been recorded at Westminster Abbey by Robert Quinney.[17] Farrington has made a version of Elgar's Concert Allegro for piano and orchestra which he has recorded, as well as his solo piano arrangement of Elgar's 2nd Symphony. [18] He has also transcribed Elgar's Five Piano Improvisations and made piano versions of Falstaff, the 1st Symphony, and the Elgar/Payne 3rd Symphony.[19][20][21][22]

He is the Arranger in Residence for the Aurora Orchestra, and has made many reduced versions of operas, orchestral and choral works for chamber ensembles.[23] Operas include Dvorak's Rusalka, Janáček's The Cunning Little Vixen and Tippett's King Priam.[24][25][26] Orchestral works include Bernstein's Symphonic Dances from West Side Story, Brahms Hungarian Dance No. 5 (performed at the Proms 2010), Mahler's 1st Symphony, Das Lied von der Erde and Lieder eines fahrenden Gesellen.[27][28][29][30][31] He orchestrated and arranged all the songs for the Horrible Histories Prom in 2011.[32] Choral works arranged include Bach's Christ lag in Todesbanden (for English Touring Opera) and Brahms A German Requiem.[33][34]

This article uses material from the article Iain Farrington from the free encyclopedia Wikipedia and it is licensed under the GNU Free Documentation License.