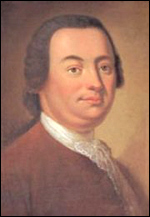 Johann Christoph Friedrich Bach (21 June 1732 – 26 January 1795) was a harpsichordist and composer, the fifth son of Johann Sebastian Bach, sometimes referred to as the "Bückeburg Bach".

Born in Leipzig in the Electorate of Saxony, he was taught music by his father, and also tutored by his distant cousin Johann Elias Bach. He studied at the St. Thomas School, and some believe he studied law at the university there, but there is no record of this. In 1750, William, Count of Schaumburg-Lippe appointed Johann Christoph harpsichordist at Bückeburg, and in 1759, he became concertmaster. While there, Bach collaborated with Johann Gottfried Herder, who provided the texts for six vocal works; the music survives for only four of these.

Bach wrote keyboard sonatas, symphonies, oratorios, liturgical choir pieces and motets, operas and songs. Because of Count Wilhelm's predilection for Italian music, Bach had to adapt his style accordingly, but he retained stylistic traits of the music of his father and of his brother, C. P. E. Bach.

The 1911 Encyclopædia Britannica says of him "He was an industrious composer, ... whose work reflects no discredit on the family name." He was an outstanding virtuoso of the keyboard, with a reasonably wide repertory of surviving works, including twenty symphonies, the later ones influenced by Haydn and Mozart; hardly a genre of vocal music was neglected by him.[2]

A significant portion of J. C. F. Bach's output was lost in the WWII destruction of the Staatliches Institut für Musikforschung in Berlin, where the scores had been on deposit since 1917. Musicologists Hansdieter Wohlfahrth, who catalogued his works, and Ulrich Leisinger consider Bach a transitional figure in the mold of his half-brother C. P. E., his brother Johann Christian, the Grauns (Carl and Johann), and Georg Philipp Telemann, with some works in the style of the high Baroque, some in a galant idiom, and still others which combine elements of the two, along with traits of the nascent classical style.

Other works in Wohlfarth's catalogue

Works not referenced in any catalogue

This article uses material from the article Johann Christoph Friedrich Bach from the free encyclopedia Wikipedia and it is licensed under the GNU Free Documentation License.

Nikolaj Rimsky-Korsakov "Sindbad der Seefahrer" aus "Scheherazade" op. 35
Update Required To play the media you will need to either update your browser to a recent version or update your Flash plugin.