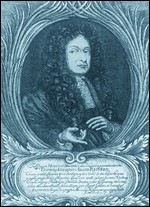 Johann Adam Reincken (also Jan Adams, Jean Adam, Reinken, Reinkinck, Reincke, Reinicke, Reinike; baptized 10 December 1643 24 November 1722) was a Dutch/German organist and composer. He was one of the most important German composers of the 17th century, a friend of Dieterich Buxtehude and a major influence on Johann Sebastian Bach, however, very few works of his survive to this day.

The widespread claims about Reincken's exceptional longevity stem from Johann Mattheson, who, writing in 1722, gave his date of birth as 27 April 1623. However, Reincken himself stated (on the title page of Hortus musicus) that his birthplace was Deventer, and no records were found there to support Mattheson's claim. A "Jan Reinse" was baptized in Deventer on 10 December 1643; this is the date currently accepted by most scholars, although it is in many ways as problematic as that given by Mattheson.

Reincken received primary music education in Deventer in 1650–54, from Lucas van Lennick, organist of the Grotekerk (Lebuinuskerk). In 1654 he departed for Hamburg to study under Heinrich Scheidemann, organist of St. Katharine's Church (Katharinenkirche). In 1657 he returned to Deventer and became organist of the Bergkerk on 11 March; however, after only a year he left for Hamburg again, this time to become Scheidemann's assistant. When the older composer died in 1663, Reincken succeeded him at St. Katharine's. In 1665 he married one of Scheidemann's daughters, and their only child Margaretha-Maria was born three years later.

The composer kept his position at St. Katharine's until his death in 1722, although in 1705 some of the church elders attempted to appoint Johann Mattheson as Reincken's successor. Unlike many other contemporary organists, Reincken died wealthy. In his lifetime he was heralded as one of the best organists in Germany; he knew Dieterich Buxtehude closely and influenced Vincent Lübeck and Johann Sebastian Bach. The latter may have met him; a well-known apocryphal anecdote describes how Reincken and Bach met, and how, after Bach improvised a lengthy fantasia on the Lutheran chorale An Wasserflüssen Babylon (paying homage to Reincken's massive fantasia on the same chorale), Reincken remarked: "I thought that this art was dead, but I see that it lives in you."[1] Christoph Wolff adds as a further detail of this visit by Bach to Hamburg in 1722, that on that occasion he performed the organ fugue BWV 542, the theme of which is based on a Dutch popular tune (called 'Ik ben gegroet van'), presumably as an homage to Reincken's Dutch origin. At any rate, Bach was evidently deeply impressed by Reincken's music, arranging several of the works from Hortus musicus (as BWV 954, 965 and 966). In 2006, the earliest known Bach autograph was discovered in Weimar: a copy of Reincken's An Wasserflüssen Babylon, which Bach made for his then teacher Georg Böhm in Lüneburg in 1700.

This article uses material from the article Johann Adam Reincken from the free encyclopedia Wikipedia and it is licensed under the GNU Free Documentation License.