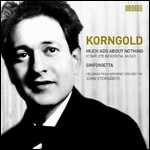 Erich Wolfgang Korngold (May 29, 1897 – November 29, 1957) was an Austrian-born composer and conductor. A child prodigy, he became one of the most important and influential composers in Hollywood history.[1] He was a noted pianist and composer of classical music, along with music for Hollywood films, and the first composer of international stature to write Hollywood scores.[1][2]

When he was 11, his ballet Der Schneemann (The Snowman), became a sensation in Vienna, followed by his Second Piano Sonata which he wrote at age 13, played throughout Europe by Artur Schnabel. His one-act operas Violanta and Der Ring des Polykrates were premiered in Munich in 1916, conducted by Bruno Walter. At 23, his opera Die tote Stadt (The Dead City) premiered in Hamburg and Cologne. In 1921 he conducted the Hamburg Opera.[3] During the 1920s he re-orchestrated, re-arranged and nearly re-composed, for the theater, operettas by Johann Strauss II. By 1931 he was a professor of music at Vienna State Academy.

At the request of director Max Reinhardt, and due to the rise of the Nazi regime, Korngold moved to the U.S. in 1934 to write music scores for films. His first was Reinhardt's A Midsummer Night's Dream (1935), which was well received by critics. He subsequently wrote scores for such films as Captain Blood (1935), which helped boost the career of its starring newcomer, Errol Flynn. His score for Anthony Adverse (1936) won an Oscar, and was followed two years later with another Oscar for The Adventures of Robin Hood (1938).

Overall, he wrote the score for 16 Hollywood films, receiving two more nominations. Along with Max Steiner and Alfred Newman, he is one of the founders of film music. Although his late classical Romantic compositions were no longer as popular when he died in 1957, his music underwent a resurgence of interest in the 1970s beginning with the release of the RCA Red Seal album The Sea Hawk: the Classic Film Scores of Erich Wolfgang Korngold (1972). This album was hugely popular and ignited interest in other film music of his (and other composers like Steiner) and in his concert music, which often incorporated popular themes from his film scores (an example being the Violin Concerto in D, Op. 35).

Erich Wolfgang Korngold was born to a Jewish family in Brünn, Austria-Hungary (present-day Brno, Czech Republic). Erich was the second son of eminent music critic (Leopold) Julius Korngold; Erich's older brother Hans Robert Korngold (1892–1965) was also a musician. A child prodigy living in Vienna, Erich could play four-hand piano arrangements alongside his father at age five. He was also able to reproduce any melody he heard on the piano, along with playing complete and elaborate chords. By age seven, he was writing original music.[4]:11

Korngold played his cantata Gold for Gustav Mahler in 1909; Mahler called him a "musical genius" and recommended he study with composer Alexander von Zemlinsky. Richard Strauss also spoke highly of the youth, and along with Mahler told Korngold's father there was no benefit in having his son enroll in a music conservatory since his abilities were already years ahead of what he could learn there.[4]:11

At age 11, he composed his ballet Der Schneemann (The Snowman), which became a sensation when performed at the Vienna Court Opera in 1910, including a command performance for Emperor Franz Josef.[2] He continued composing with great success throughout his teens.[5] At age 12, he composed a piano trio. His Piano Sonata No. 2 in E major, which followed, was played throughout Europe by Artur Schnabel .[6] During these early years he also made live-recording player piano music rolls for the Hupfeld DEA and Phonola system and also the Aeolian Duo-Art system, which survive today and can be heard.[7]

Korngold wrote his first orchestral score, the Schauspiel-Ouvertüre, when he was 14. His Sinfonietta appeared the following year, and his first two operas, Der Ring des Polykrates and Violanta, in 1914.[8] In 1916, he wrote songs, chamber works, and incidental music, including to Much Ado About Nothing, which ran for some 80 performances in Vienna.[5]

Korngold was active in the theatre throughout Europe while in his 20s. After the success of his opera, Die tote Stadt, which he conducted in many opera houses, he developed a passion for the music of Johann Strauss II and managed to exhume a number of lost scores.[4]:13 He orchestrated and staged them using new concepts.[4]:13 Both A Night in Venice and Cagliostro in Vienna are Korngold re-creations;[4]:13 these were the works that first drew the attention of Max Reinhardt to Korngold.[4]:13

By this point Korngold had reached the zenith of his fame as a composer of opera and concert music. Composers such as Richard Strauss and Giacomo Puccini heaped praise upon him, and many famous conductors, soloists and singers added his works to their repertoires. He began collaborating with Reinhardt on many productions, including a collection of little-known Strauss pieces that they arranged, Waltzes From Vienna.[4]:13 It was retitled The Great Waltz and became the basis for a 1934 British film directed by Alfred Hitchcock[4]:13 and a film by the same name in the US, starring Luise Rainer. Korngold conducted staged versions in Los Angeles in 1949 and 1953.[4]:13

He completed a Concerto for Piano Left Hand for pianist Paul Wittgenstein in 1923 and his fourth opera, Das Wunder der Heliane four years later. He started arranging and conducting operettas by Johann Strauss II and others while teaching opera and composition at the Vienna Staatsakademie. Korngold was awarded the title professor honoris causa by the president of Austria.[6]

After Max Reinhardt's success in producing Shakespeare's A Midsummer Night's Dream for the stage, using incidental music by Felix Mendelssohn, he invited Korngold to Hollywood in 1934 to adapt Mendelssohn's score for his planned film version.[4]:8 Korngold would also enlarge and conduct the score.

The film, which was released in 1935, was a first for Warner Brothers studio, by producing a film based on a 400-year-old work of literary art. The studio assigned almost every star or character actor under contract to take part in the film, with the filming taking over six months.[4]:8 The studio also allowed Korngold to devote more attention to the score than it had to any of its previous films; he could prerecord certain parts of the film for the benefit of actors, whom he then had act to the rhythm and tempo of the music.[4]:8 As a result of the score's elaborate tailoring, the film and Korngold's music left a strong impression on the film industry.[4]:8

Korngold returned to Austria to finish Die Kathrin. He came back to Hollywood to score the film Give Us This Night, with lyricist Oscar Hammerstein II, a film which introduced mezzo-soprano Gladys Swarthout and the Polish-born tenor Jan Kiepura, who had starred in several Korngold operas in Europe.[4]:9

In 1935 Warners asked Korngold if he was interested in writing an original dramatic score for Captain Blood. He at first declined, feeling that a story about pirates was outside his range of interest. However, after watching the filming, with a dynamic new star, Errol Flynn in a heroic role, alongside Olivia de Havilland, who had her debut in A Midsummer Night's Dream, he changed his mind.

Korngold not only had the background but also had the gift of melody, an innate sense of theater, and the skills to manipulate sentiment, emotion, humor, and excitement. In short, if Jack L. Warner had been praying for such a composer, then his prayers had been answered.

After he accepted, however, he learned that he needed to compose over an hour of symphonic music in only three weeks. The short time frame forced him to use portions of symphonies by Franz Liszt in about ten percent of the score. And not willing to take credit for the entire film score, he insisted that his credit be only for "musical arrangement".[4]:8

Captain Blood became an immediate hit, with an Oscar nomination for the score.[9] As Korngold's first fully symphonic film score, it marked a milestone in his career, as he became the first composer of international stature to sign a contract with a film studio.[4]:10[10] It also launched the career of Flynn and gave a major boost to de Havilland's, who did another seven movies with Flynn. Korngold scored six more films starring Flynn.[4]:21 In addition, Captain Blood opened the way for other costumed, romantic adventures, which hadn't been seen since the silent era.[4]:9

After scoring Anthony Adverse, another Warners picture, this one starring Fredric March and Olivia de Havilland, Korngold's career in Hollywood developed quickly. He finally became convinced that dramatic scoring went well with certain types of films.[4]:23 The film, which is set in mid-18th century Italy, the Alps, and France, received an expensive treatment from Warners, which pleased him greatly.[4]:23

In this film, the first half hour contains continuous scoring,[4]:23 and proved to be a major step forward in the art of film scoring. Korngold was awarded his first Academy Award.

In 1938, Korngold was conducting opera in Austria when he was asked by Warner Brothers to return to Hollywood and compose a score for The Adventures of Robin Hood (1938), starring Errol Flynn and Olivia de Havilland. The film, based on a largely fictional English legend, is considered the finest of its kind, with a continuous series of romantic and adventurous sequences propelled by Korngold's dynamic score.[4]:27 Music historian Laurence E. MacDonald notes that there were many factors which made the film a success, including its cast, its Technicolor photography and fast-paced direction by Michael Curtiz, but "most of all, there is Korngold's glorious music."[11]:49 And film historian Rudy Behlmer describes Korngold's contribution to this and his other films:

Korngold's score was a splendid added dimension. His style for the Flynn swashbucklers resembled that of the creators of late nineteenth-century and early twentieth-century German symphonic tone poems. It incorporated chromatic harmonies, lush instrumental effects, passionate climaxes—all performed in a generally romantic manner. Korngold's original and distinctive style was influenced by the Wagnerian leitmotif, the orchestral virtuosity of Richard Strauss, the delicacy and broad melodic sweep of Puccini, and the long-line development of Gustav Mahler.[12]:38

Before Korngold began composing the score, Austria was invaded by Germany and annexed by the Nazis. His home in Vienna was confiscated by the Nazis.[12]:35 And because it meant that all Jews in Austria were now at risk, Korngold stayed in America until the end of World War II. He later said, "We thought of ourselves as Viennese; Hitler made us Jewish."[13] Korngold noted that the opportunity to compose the score for Robin Hood saved his life.

It also gave him his second Academy Award for Best Original Score and established the symphonic style that would later be used in action films during Hollywood's Golden Age.[11]:50 Modern day epics such as the Star Wars and Indiana Jones trilogies similarly included original symphonic scores.[11]:50 Composer John Williams has cited Korngold as his inspiration in scoring the Star Wars series.[14]:717

Korngold was interested in writing a score for Juarez, as it involved historical figures from Mexico and Austria. It dealt with the Mexican politician Benito Juarez, but also involved the story of Archduke Maximilian von Habsburg and his wife, Carlotta. Korngold was moved by the true-life story of how Louis Napoleon, seeing America engulfed by Civil War, took advantage of that fact and attempted, in 1864, to control Mexico. He appointed Maximilian as its emperor.[4]:29

This article uses material from the article Erich Wolfgang Korngold from the free encyclopedia Wikipedia and it is licensed under the GNU Free Documentation License.

Johann Sebastian Bach Andante aus der Sonate e-moll BWV 1034
Update Required To play the media you will need to either update your browser to a recent version or update your Flash plugin.