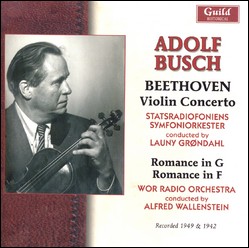 Busch was born in Siegen in Westphalia. He studied at the Cologne Conservatory with Willy Hess and Bram Eldering. His composition teacher was Fritz Steinbach but he also learned much from his future father-in-law Hugo Grüters in Bonn.

In 1912, Busch founded the Vienna Konzertverein Quartet, consisting of the principals from the Konzertverein orchestra, which made its debut at the 1913 Salzburg Festival. After World War I, he founded the Busch Quartet, which from the 192021 season included Gösta Andreasson, violin, Karl Doktor, viola, and Paul Grümmer, cello. The quartet was in existence with varying personnel until 1951.

The additional member of the circle was Rudolf Serkin, who became Busch's duo partner at 18 and eventually married Busch's daughter, Irene. The Busch Quartet and Serkin became the nucleus of the Busch Chamber Players, a forerunner of modern chamber orchestras.

In 1927, with the rise of Adolf Hitler, Busch decided he could not in good conscience stay in Germany, so he emigrated to Basel, Switzerland. Busch was not Jewish and was popular in Germany, but firmly opposed Nazism from the beginning. On 1 April 1933 he repudiated Germany altogether and in 1938 he boycotted Italy. As the Nazis tried to convince him to return to Germany, he declared that he would "return with joy on the day that Hitler, Goebbels und Göring are publicly hanged."[1] On the outbreak of World War II, Busch emigrated from Basel to the United States, where he eventually settled in Vermont. There, he was one of the founders with Rudolf Serkin of the Marlboro Music School and Festival.

The Busch Quartet was particularly admired for its interpretations of Brahms, Schubert, and above all Beethoven. It made a series of recordings in the 1930s that included many of these composers' works for string quartet. In 1941, it set down three Beethoven quartets that it had not previously recorded, including Opus 130. The Busch Quartet never recorded the Grosse Fuge, Opus 133; an arrangement was recorded by the Busch Chamber Players, with Busch leading from the first violin desk.

Busch was a great soloist, as well as a chamber musician, and live recordings exist of him playing the Beethoven, Brahms, Dvorák and Busoni Concertos, as well as the Brahms Double Concerto. In the studio he recorded concertos and chamber orchestra performances of Bach and Mozart, and of the Concerti grossi, op.6 by Handel; his recordings of Bach's Brandenburg Concertos brought them to prominence[2] after many years of relative obscurity. He had a highly individual tone and great technique. Among his students were Stefi Geyer, Erica Morini and Yehudi Menuhin.

As a composer, Busch was influenced by Max Reger. He was among the first to compose a Concerto for Orchestra, in 1929. A number of his compositions have been recorded, including the Violin Concerto (A minor, opus 20, published 1922),[3] String Sextet (G major, opus 40), Quintet for Saxophone and String Quartet, and several large scale works for organ. Regarding the latter, Busch once remarked that if he could come back after his death he would like to return as an organist.

He was the son of the luthier Wilhelm Busch; brother of the conductor Fritz Busch, the cellist Hermann Busch, the pianist Heinrich Busch and the actor Willi Busch, and grandfather of the pianist Peter Serkin. An exhaustive two-volume biography of Busch by Tully Potter was published in 2010 by Toccata Press [4]

This article uses material from the article Adolf Busch from the free encyclopedia Wikipedia and it is licensed under the GNU Free Documentation License.