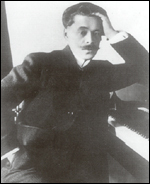 Arensky was born in a music-loving, affluent family in Novgorod, Russia. He was musically precocious and had composed a number of songs and piano pieces by the age of nine. With his mother and father, he moved to Saint Petersburg in 1879, after which he studied composition at the Saint Petersburg Conservatory with Nikolai Rimsky-Korsakov.

After graduating from the Saint Petersburg Conservatory in 1882, Arensky became a professor at the Moscow Conservatory. Among his students there were Alexander Scriabin, Sergei Rachmaninoff and Alexander Gretchaninov.[1]

In 1895 Arensky returned to Saint Petersburg as the director of the Imperial Choir, a post for which he had been recommended by Mily Balakirev. He retired from this position in 1901, living off a comfortable pension and spending his remaining time as a pianist, conductor, and composer.

Arensky died of tuberculosis in a sanatorium in Perkjärvi, in what was then the Russian-administered Grand Duchy of Finland, at the age of 44. While very little is known about his private life, Rimsky-Korsakov alleges that drinking and gambling undermined his health.[2] He was buried in the Tikhvin Cemetery.

The Antarctic Arensky Glacier was named after him.

Pyotr Ilyich Tchaikovsky was the greatest influence on Arensky's musical compositions. Indeed, Rimsky-Korsakov said, "In his youth Arensky did not escape some influence from me; later the influence came from Tchaikovsky. He will quickly be forgotten." The perception that he lacked a distinctive personal style contributed to long-term neglect of his music, though in recent years a large number of his compositions have been recorded. Especially popular are the Variations on a Theme of Tchaikovsky for string orchestra, Op. 35a - arranged from the slow movement of Arensky's 2nd string quartet, and based on one of Tchaikovsky's Songs for Children, Op. 54.

Arensky was perhaps at his best in chamber music, in which genre he wrote two string quartets, two piano trios, and a piano quintet.

(for solo piano unless otherwise specified)

This article uses material from the article Anton Arensky from the free encyclopedia Wikipedia and it is licensed under the GNU Free Documentation License.