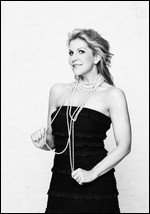 Joyce DiDonato (born February 13, 1969) is an American operatic lyric-coloratura mezzo-soprano[1] particularly admired for her interpretations of the works of Handel, Mozart, and Rossini. She has performed with many of the world's leading opera companies and orchestras and in 2012 won a Grammy Award for Best Classical Vocal Solo.

Joyce DiDonato was born Joyce Flaherty in Prairie Village, Kansas in 1969, the sixth of seven children in a close-knit Irish-American family. She sang in choir and musicals in high school and dreamed of becoming a Broadway star or pop singer.

DiDonato entered Wichita State University (WSU) in the autumn of 1988 where she studied vocal music education. She was initially more interested in teaching high school vocal music and musical theatre and did not become interested in opera until she saw a PB televised broadcast of Don Giovanni[2] and then, in her junior year, when she was cast in a school production of Die Fledermaus.[3]

After graduating from WSU in spring 1992, DiDonato decided to pursue graduate studies in vocal performance at the Academy of Vocal Arts.[4] Following her studies in Philadelphia, she was accepted in The Santa Fe Opera's Apprentice Singer program for the summer 1995 festival season. While there she appeared in several minor roles and understudied for larger parts in such operas as Mozart's Le nozze di Figaro, Richard Strauss' Salome, Kálmán's Gräfin Mariza and the 1994 world premiere of David Lang's Modern Painters. DiDonato was honored as the Outstanding Apprentice Artist by The Santa Fe Opera that year.

In 1996 she became a part of Houston Grand Opera's young artist program where she sang from autumn 1996 to spring 1998. During the summer of 1997, DiDonato participated in San Francisco Opera's Merola Program.[5]

During her apprentice years, DiDonato competed in several notable vocal competitions. In 1996 she won second prize in the Eleanor McCollum Competition and was a district winner of the Metropolitan Opera National Council Auditions. In 1997 she won a William Matheus Sullivan Award, while in 1998 she won second prize in the Operalia Competition, first place in the Stewart Awards, won the George London Competition, and a received a Richard F. Gold Career Grant from the Shoshana Foundation.[6]

DiDonato began her professional career in the 1998/1999 season singing with several regional opera companies in the United States. She most notably appeared as the main heroine, Maslova, in the world premiere of Tod Machover's Resurrection with the Houston Grand Opera. [7] She gave a recital in San Francisco that year as part of the Schwabacher recital series.

Also at Houston Grand Opera, DiDonato performed the role of Meg in the world premiere during the 1999/2000 season of Mark Adamo's Little Women at with Stephanie Novacek as Jo and Chad Shelton as Laurie. That season, she also sang the role of Cherubino in Mozart's Le nozze di Figaro with The Santa Fe Opera and the role of Isabella in Rossini's L'italiana in Algeri with the New Israeli Opera. In addition, DiDonato gave a recital at New York's Morgan Library under the auspices of the George London Foundation and sang the mezzo-soprano solos in the Seattle Symphony's production of Handel's Messiah.[8]

DiDonato made her debut at La Scala as Angelina in Rossini's La Cenerentola in the 2000/2001 season, returned to Houston Grand Opera as Dorabella in Mozart's Così fan tutte, and sang the mezzo-soprano solos in Bach's Mass in B minor with the Ensemble Orchestral de Paris and conductor John Nelson.[8]

In the 2001/2002 season included debuts with Washington National Opera as Dorabella in Mozart's Così fan tutte, with De Nederlandse Opera as Sesto in Handel's Giulio Cesare, with Opéra National de Paris as Rosina in Rossini's Il barbiere di Siviglia, and with Bavarian State Opera as Cherubino in Mozart's Le nozze di Figaro under the baton of Zubin Mehta. Also, she returned to The Santa Fe Opera to perform the role of Annio in Mozart's La clemenza di Tito and made several concert appearances, including those with Riccardo Muti conducting the La Scala Orchestra in Vivaldi's Gloria and the Ensemble Orchestral de Paris's presentation of Mendelssohn's A Midsummer Night's Dream.

Debuts with the New York City Opera (as Sister Helen in Jake Heggie's Dead Man Walking), at the Théâtre du Châtelet in the title role of Rossini's La cenerentola, at the Royal Opera House as Zlatohrbitek the fox in Janáek's The Cunning Little Vixen under the baton of Sir John Eliot Gardiner, and with the New National Theatre Tokyo as Rosina in Rossini's Il barbiere di Siviglia all came during the 2002/2003 season. That same season saw performances of the title role in Rossini's Adina at the Rossini Opera Festival in Pesaro and the role of Cherubino in Mozart's Le nozze di Figaro with Opéra Bastille. In concert, DiDonato performed Mozart's Requiem with the Seattle Symphony, Berlioz's Les nuits d'été with the Ensemble Orchestral de Paris, and made her Carnegie Hall debut in a production of Bach's Mass in B Minor with the Orchestra of St. Luke's under the baton of Peter Schreier. She toured Europe with Marc Minkowski and Les Musiciens du Louvre in performances of Les nuits d'été.[9]

The 2003/2004 season saw DiDonato made her debut with the San Francisco Opera as Rosina in Rossini's Il barbiere di Siviglia plus a reprise of the role with Houston Grand Opera. She performed Idamante in Mozart's Idomeneo with De Nederlandse Opera and at the Aix-en-Provence Festival, also sang the role of Ascanio in a concert performance of Berlioz's Benvenuto Cellini with the Orchestre National de France. Solo recital appearances included the Lincoln Center, the Kennedy Center, Kansas City's Folly Theater, and Wigmore Hall among others. She sang at the Hollywood Bowl in a production of Beethoven's Symphony No. 9 with the Los Angeles Philharmonic.[9]

In the role of Elisabetta at the Grand Théâtre de Genève, Didonato gave her first performances in Donizetti's Maria Stuarda during the 2004/2005 season. Also, she returned to La Scala as Angelina in Rossini's La Cenerentola and once again played Rosina in a new production of Rossini's Il barbiere di Siviglia by Luca Ronconi at the Pesaro Festival and the Teatro Comunale di Bologna.[8]

2005/2006 season appearances included DiDonato's Metropolitan Opera debut as Cherubino in Le nozze di Figaro and she also played Stéphano in Gounod's Roméo et Juliette at the Met. She returned to the Royal Opera House as Rosina in Il barbiere di Siviglia, sang her first Sesto in Mozart's La clemenza di Tito with Grand Théâtre de Genève, and sang the role of Dejanira in Handel's Hercules at the Brooklyn Academy of Music in New York and at the Barbican Centre in London with William Christie. In addition, DiDonato appeared in several concerts with the New York Philharmonic and gave a recital at Wigmore Hall in London. She closed The Santa Fe Opera's 50th anniversary season in the title role of Massenet's Cendrillon.[8]

In the 2006/2007 season, DiDonato debuted at the Teatro Real as the Composer in Richard Strauss' Ariadne auf Naxos, returned to the Opéra National de Paris as Idamante in Mozart's Idomeneo, and returned to Houston Grand Opera as Angelina in La Cenerentola. She sang Rosina in Il barbiere di Siviglia at the Metropolitan Opera and sang her first Octavian in Richard Strauss' Der Rosenkavalier with the San Francisco Opera. She toured the U.S. and Europe on an extensive recital tour with accompanist Julius Drake.[10]

DiDonato's 2007/2008 season appearances included her debut at the Liceu as Angelina in La Cenerentola and at the Lyric Opera of Chicago as Rosina in Il barbiere di Siviglia. She sang the title role in Handel's Alcina with Alan Curtis and Il Complesso Barocco and the title role in Handel's Ariodante at the Grand Théâtre de Genève. Also, she sang Roméo in Bellini's I Capuleti e i Montecchi with Opéra Bastille and returned to Madrid's Teatro Real as Idamante in Idomeneo in July 2008. DiDonato also gave recitals at La Scala, Lincoln Center, and the Brooklyn Academy of Music, and performed a special concert of Handel arias which was recorded in Brussels.[11]

In the 2008/2009 season, DiDonato returned to Covent Garden as Donna Elvira in Mozart's Don Giovanni and as Rosina in Il barbiere di Siviglia. In a performance of that opera on July 7, DiDonato slipped onstage and broke her right fibula; she finished the first act hobbling and the rest of the performance on crutches. She then performed the five remaining scheduled performances from a wheelchair.[12] She performed the roles of Beatrice in Berlioz's Béatrice et Bénédict with Houston Grand Opera, Idamante in Mozart's Idomeneo with Opéra National de Paris, and Rosina in Il barbiere di Siviglia in her debut with Vienna State Opera.

DiDonato also appeared in concerts with the New York Philharmonic, Kansas City Symphony, and the Metropolitan Opera Orchestra, the latter of which under the baton of James Levine. She toured Europe and the United States with Les Talens Lyriques giving concerts of Handel arias, including performances at Wigmore Hall and the Rossini Opera Festival.[13]

DiDonato sang the role of Isolier in Rossini's Le comte Ory with the Metropolitan Opera in April 2011.

In April 2012, she sang the role of Mary Stuart in Donizetti's Maria Stuarda with the Houston Grand Opera,[14] repeating the role in the work's premiere performances at the Metropolitan Opera in January 2013.

Spring 2013 saw DiDonato starring in a new production of Rossini's La donna del lago given by The Royal Opera, Covent Garden. [15] A new production was mounted by The Santa Fe Opera during its 2013 festival season, also starring Joyce DiDonato with Lawrence Brownlee as Uberto. [16] For the first time in its 57-year history, The Santa Fe Opera added an extra performance of La donna del lago due to unprecedented ticket demand.[17]

On 7 September 2013 she performed at the Last Night of the Proms, singing arias by Massenet ("Je suis gris! je suis ivre!"), Handel ("Ombra mai fu"), and Rossini ("Tanti affetti in tal momento!") as well as "You'll Never Walk Alone" from the musical Carousel, "Over the Rainbow" from the Wizard of Oz as a bow to her home State of Kansas, and "Danny Boy"; she then led the audience into the traditional "Rule, Britannia!".[18] On September 21, 2013 she sang the role of Romeo as the Lyric Opera of Kansas City opened its season with Bellini's I Capuleti e i Montecchi.[19]

2012: At the 54th Grammy Awards, the "Grammy" for Best Classical Vocal Solo was awarded to DiDonato for her solo recording Diva Divo.[23]

This article uses material from the article Joyce DiDonato from the free encyclopedia Wikipedia and it is licensed under the GNU Free Documentation License.