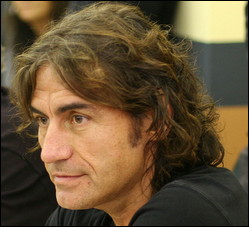 Ligabue was born in Correggio, in the province of Reggio Emilia (Emilia-Romagna in northern Italy). Before becoming a successful singer, he held various jobs, working in agriculture and in factories. He entered the music world in 1987, when he founded the amateur band Orazero. For this band he wrote several original songs, with which they participated in several local and national contests. The following year his fellow Emilian singer-songwriter Pierangelo Bertoli was the first to discover Ligabue's writing talents, and included one of Ligabue's songs, "Sogni di Rock'n'Roll" ("Rock n roll dreams"), in his new LP.

The following year Bertoli introduced him to producer Angelo Carrara, to finish an LP of his own, Ligabue, which was released in May 1990. Ligabue soon gained fame as one of the most successful Italian rock stars, finding fans mainly among younger audiences. His most famous hits include Balliamo sul mondo (Let's Dance on the World), Ho perso le parole (I've lost words) and the most successful of all, Certe Notti (Certain Nights), which was voted as "Italian song of the 1990s" in a poll held by a popular music magazine. He also collaborated with another famous singer-songwriter, Francesco Guccini, who also had a part in Ligabue's first movie.

Ligabue directed his first movie, Radiofreccia, in 1998, a semi-autobiographical story of a local radio station. Critics acclaimed it as surprisingly well shot for a newcomer, and the film received 3 David di Donatello (the highest award in Italian cinema). He also composed the soundtrack. Four years later he shot Da zero a dieci ("From Zero to Ten"): however, it was not as well received as the first work, by both critics and fans.

On 10 September 2005, Ligabue held a concert in Reggio Emilia to celebrate his first 15 years of activity. The audience of around 180,000 set a European audience record for the one, non-free event for a single artist. However, due to problems with the audio system, several thousand people were unable to listen to the music and left the concert early. Ligabue later apologised for the problems.

He considers himself a "believer", even if he shows strong criticism towards the traditional teachings of the Catholic Church.[2]

He is an Inter Milan fan.

In the 1980s Ligabue was member of the communal council of his native Correggio, elected for the Italian Communist Party. Though he no longer assumes a public high-level political position, Ligabue, together with Jovanotti and Piero Pelù, released in 1999 the single "Il mio nome è mai più" ("My Name Is Never Again"), a song against the Kosovo War to collect funds for the Italian NGO Emergency.

This article uses material from the article Luciano Ligabue from the free encyclopedia Wikipedia and it is licensed under the GNU Free Documentation License.

Georg Philipp Telemann Suite für Orchester g-Moll
Update Required To play the media you will need to either update your browser to a recent version or update your Flash plugin.