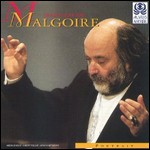 He was born in Avignon, France and studied music locally and at the Paris Conservatory. His early musical career was as an oboist.[1]

In 1966, he founded La Grande Écurie et la Chambre du Roy, a period-instrument Baroque music ensemble. He later abandoned performing as an oboist and since the later part of the twentieth century he has been recognized as an important French conductor of mainly Baroque music.

This article uses material from the article Jean-Claude Malgoire from the free encyclopedia Wikipedia and it is licensed under the GNU Free Documentation License.