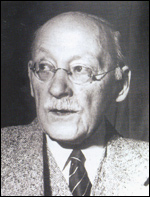 Starting in 1897, Alfvén travelled much of the next ten years in Europe. He studied violin technique in Brussels with César Thomson and learned conducting in Dresden as sub-conductor under Hermann Ludwig Kutzschbach. In 1903-4 he was professor of composition at the Royal Conservatory, Stockholm. From 1910 Alfvén was Director musices (music director) at the University of Uppsala (a post he held until 1939). There he also directed the male voice choir Orphei Drängar (or 'O.D.') (until 1947). He conducted in festivals at Dortmund (1912), Stuttgart (1913), Gothenburg (1915), and Copenhagen (1918–1919). He toured Europe as a conductor throughout his life. He received a Ph.D. honoris causa from Uppsala in 1917 and became a member of the Royal Academy of Music in Stockholm in 1908.[1] Alfvén recorded some of his orchestral music in stereo late in 1954 (the first classical stereo recordings made in Sweden);[2] the recordings were issued on LP in the U.S. by Westminster Records. A three-CD collection of Alfvén's recordings as a conductor has been issued.

Alfvén became known as one of Sweden's principal composers of his time, together with his contemporary Wilhelm Stenhammar. Alfvén's music is in a late-Romantic idiom. His orchestration is skillful and colorful, reminiscent of that of Richard Strauss. Like Strauss, Alfvén wrote a considerable amount of program music. Some of Alfvén's music evokes the landscape of Sweden.

Among his works are a large number of pieces for male voice choir, five symphonies and three orchestral "Swedish Rhapsodies." The first of these rhapsodies, Midsommarvaka is his best known piece.

Alfvén's five symphonies, the first four of them now several-times recorded (with another cycle in progress), give a picture of the composer's musical progress. The first, in F minor, his Op. 7 from 1897, is an early work, tuneful in a standard four movements. The second, in D major (1898–99), his Op. 11 (and in a way his graduation piece, as recounted [2]) concludes with a substantial, even powerful chorale-prelude and fugue in D minor. The third symphony in E major, Op. 23 (1905), also in four movements, more mature in technique though light in manner was inspired by a trip to Italy. The fourth symphony in C minor, Op. 39, of 1918–9 "From the Outermost Skerries" (there is also a tone-poem, A Legend of the Skerries) is a symphony in one forty-five-minute movement using wordless voices, inspired by Carl Nielsen's Sinfonia Espansiva. The 5th in A minor, begun 1942, is one of the composer's last works, and has been recorded only twice in full (recordings and performances of the 5th, while rare enough, are usually of its quarter-hour first movement).

Naxos Records and BIS Records among others have either collections or groups of individual recordings covering all of his symphonies and a range of his works. Brilliant Classics has licensed and re-issued the 5-CD set from BIS devoted to Alfvén that includes the symphonies and other orchestral works.

Alfvén's contributions were multi-dimensional and also included painting and writing. He was a talented watercolorist and once thought to devote himself entirely to painting. He also was a gifted writer. His four-volume autobiography has been called "captivating" and provides significant insight into the musical life of Sweden in which Alfvén was a central figure for well over half a century.

When Hugo Alfvén died, his musical archive was handed over to the University of Uppsala and Jan Olof Rudén was then responsible for filing Alfvén's music, trying to create order in the chaos of a total of 214 works. The works of the composer were officially filed and opus numbered to a total of 54 musical compositions. Alfvén's works were filed according to a Rudén number along with a catalog for an opus number. Rudén has thereby attempted to classify based on other data. There still exist documents to which neither date nor Opus/Rudén number has been accorded.

In the following works below, it may be that some opus numbers contain more than one title. Opus number 48 was never used or at least recovered.

Hugo Alfvén is the most probable source of inspiration for the character "Karsten From" found in the novel De Dødes Rige (The Kingdom of the Dead) by Danish author Henrik Pontoppidan.[4]

This article uses material from the article Hugo Alfvén from the free encyclopedia Wikipedia and it is licensed under the GNU Free Documentation License.