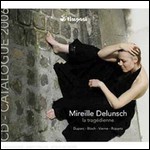 Mireille Delunsch (born 2 November 1962) is an opera soprano. She was born in Mulhouse, France, and studied musicology and voice at the Conservatoire de Strasbourg. Her debut was at the Opéra du Rhin in Mulhouse, in Mussorgsky's Boris Godunov.

Her repertory is wide, from Baroque opera to 20th-century art songs, with an emphasis on French music. She is well known for the operas she has sung under the direction of French conductor Marc Minkowski.

Among the operas Delunsch has recorded with Minkowski are:

Delunsch has also appeared in a number of opera telecasts.

This article uses material from the article Mireille Delunsch from the free encyclopedia Wikipedia and it is licensed under the GNU Free Documentation License.