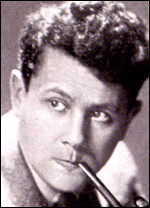 Gerald Raphael Finzi (14 July 1901 – 27 September 1956) was a British composer. Finzi is best known as a choral composer, but also wrote in other genres. Large-scale compositions by Finzi include the cantata Dies natalis for solo voice and string orchestra, and his concertos for cello and clarinet.

Gerald Finzi was born in London, the son of John Abraham (Jack) Finzi and Eliza Emma (Lizzie) Leverson. Finzi became one of the most characteristically "English" composers of his generation. Despite being an agnostic of Jewish descent, several of his choral works incorporate Christian texts.

Finzi's father, a successful shipbroker, died just a fortnight short of his son's eighth birthday.[1] Finzi was educated privately. During World War I the family settled in Harrogate, and Finzi began to study music at Christ Church, High Harrogate, under Ernest Farrar from 1915.[2] Farrar, a former pupil of Stanford, was then aged thirty and he described Finzi as "very shy, but full of poetry".[2] Finzi found him a sympathetic teacher,[2] and Farrar's death at the Western Front affected him deeply. During these formative years he also suffered the loss of all three of his brothers. These adversities contributed to Finzi's bleak outlook on life, but he found solace in the poetry of Thomas Traherne and his favourite, Thomas Hardy, whose poems, as well as those by Christina Rossetti, he began to set to music. In the poetry of Hardy, Traherne, and later William Wordsworth, Finzi was attracted by the recurrent motif of the innocence of childhood corrupted by adult experience. From the very beginning, most of his music was elegiac in tone.

After Farrar's death, Finzi studied privately at York Minster with the organist and choirmaster Edward Bairstow, a strict teacher compared to Farrar. In 1922, following five years of study with Bairstow, Finzi moved to Painswick in Gloucestershire, where he began composing in earnest. His first Hardy settings and the orchestral piece A Severn Rhapsody were soon performed in London to favourable reviews.

In 1925, at the suggestion of Adrian Boult, Finzi took a course in counterpoint with R. O. Morris and then moved to London, where he became friendly with Howard Ferguson and Edmund Rubbra. He was also introduced to Gustav Holst, Arthur Bliss and Ralph Vaughan Williams, and Vaughan Williams obtained for him a teaching post (1930–1933) at the Royal Academy of Music.

Finzi never felt at home in the city and, having married the artist Joyce Black, settled with her in Aldbourne, Wiltshire, where he devoted himself to composing and apple-growing, saving a number of rare English apple varieties from extinction. He also amassed a large library of some 3000 volumes of English poetry, philosophy and literature, now kept at the University of Reading and a collection (some 700 volumes including books, manuscripts and printed scores) of 18th-century English music, now kept at the University of St Andrews.[3]

During the 1930s, Finzi composed only a few works, but it was in these, notably the cantata Dies natalis (1939) to texts by Thomas Traherne, that his fully mature style developed. He also worked on behalf of the poet-composer Ivor Gurney, who had been committed to an institution. Finzi and his wife catalogued and edited Gurney's works for publication. They also studied and published English folk music and music by older English composers such as William Boyce, Capel Bond, John Garth, Richard Mudge, John Stanley and Charles Wesley.

In 1939 the Finzis moved to Ashmansworth in Hampshire, where he founded the Newbury String Players, an amateur chamber orchestra which he conducted until his death, reviving eighteenth century string music as well as giving premieres of works by his contemporaries, and offering chances of performance for talented young musicians such as Julian Bream and Kenneth Leighton.

The outbreak of World War II delayed the first performance of Dies natalis at the Three Choirs Festival, an event that could have established Finzi as a major composer. He worked for the Ministry of War Transport and lodged German and Czech refugees in his home. After the war, he became somewhat more productive than before, writing several choral works as well as the Clarinet Concerto (1949), perhaps his most popular work.

By now, Finzi's works were being performed frequently at the Three Choirs Festival and elsewhere. But this happiness was not to last. In 1951, Finzi learned that he was suffering from the then incurable Hodgkin's disease and had at most ten years to live. Something of his feelings after this revelation is probably reflected in the agonized first movement of his Cello Concerto (1955), Finzi's last major work, although its second movement, originally intended as a musical portrait of his wife, is more serene.

In 1956, following an excursion near Gloucester with Vaughan Williams, Finzi developed shingles, probably as a result of immune suppression caused by Hodgkin's disease. Biographies refer to him subsequently developing chickenpox, which developed into a "severe brain inflammation". What this probably means, in modern medical language, is that the shingles developed into disseminated shingles, which resembled chickenpox, and was complicated by encephalitis. He died soon afterwards, aged 55, in the Radcliffe Infirmary hospital in Oxford, the first performance of his Cello Concerto on the radio having been given the night before. His ashes were scattered on May Hill near Gloucester in 1973.[4]

Finzi’s output includes nine song cycles, six of them on the poems of Thomas Hardy. The first of these, By Footpath and Stile (1922), is for voice and string quartet; the others, including A Young Man’s Exhortation and Earth and Air and Rain, for voice and piano. Among his other songs, the settings of Shakespeare poems in the cycle Let Us Garlands Bring (1942) are the best known. He also wrote incidental music to Shakespeare’s Love’s Labour’s Lost (1946). For voice and orchestra he composed the above-mentioned Dies natalis, and the pacifist Farewell to Arms (1944).

Finzi’s choral music includes the popular anthems Lo, the full, final sacrifice and God is gone up as well as unaccompanied partsongs, but he also wrote larger-scale choral works such as For St. Cecilia (text by Edmund Blunden), Intimations of Immortality (William Wordsworth) and the Christmas scene In terra pax (Robert Bridges and the Gospel of Luke), all from the last ten years of his life.

The number of Finzi’s purely instrumental works is small even though he took great pains over them in the early part of his career. He began what is believed to have been intended as a piano concerto. This was never finished or given a title, but after his death his publisher gave two of the individual movements names and published them as the separate works Eclogue and Grand Fantasia and Toccata. The latter demonstrates Finzi’s admiration for Johann Sebastian Bach as well as the Swiss American composer Ernest Bloch. He also completed a violin concerto which was performed in London under the baton of Vaughan Williams, but was not satisfied with it and withdrew the two outer movements; the surviving middle movement is called Introit. This concerto thus received only its second performance in 1999 and its first recording is now on Chandos. Finzi's Clarinet Concerto and his Cello Concerto are possibly his most famous and frequently performed instrumental works.

Of Finzi's few chamber works, only the Five Bagatelles for clarinet and piano have survived in the regular repertoire.

Finzi had a long friendship with the composer Howard Ferguson who, as well as offering advice on his works during his life, helped with the editing of several of Finzi's posthumous works.

Finzi’s eldest son, Christopher, became a noted conductor and an exponent of his father’s music. Finzi's younger son Nigel was a successful violinist, and worked closely with their mother in promoting his father's music. Thanks to both sons and the support of other enthusiasts, as well as the work of the Finzi Trust and the Finzi Friends, Finzi’s music enjoyed a great resurgence from the late 20th century onwards.

This article uses material from the article Gerald Finzi from the free encyclopedia Wikipedia and it is licensed under the GNU Free Documentation License.

Franz Schubert 4.Satz aus der Sinfonie Nr.6 C-Dur D 589
Update Required To play the media you will need to either update your browser to a recent version or update your Flash plugin.