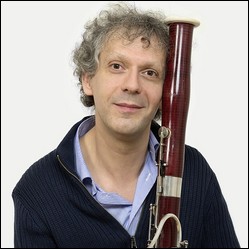 born in 1967 in Bolzano, Südtirol, Italy

Sergio Azzolini (Bolzano, 1967) is an Italian bassoonist and music conductor.[1]

Azzolini was born in Bolzano, Italy in 1967 and learned bassoon after his mother suggested being a musician would provide a long term job for him.[2]

He studied from 1978 to 1985 at Conservatorio Claudio Monteverdi in Bolzano with Romano Santi and then at Hochschule für Musik, Theater und Medien Hannover, under Klaus Thunemann, with whom he studied until 1989. At this time, he was already a soloist in the European Union Youth Orchestra.

He has been music professor at Hochschule in Stuttgart, and since 1998, is a professor of bassoon and chamber music at the Hochschule für Musik in Basel.[2][1] He is regularly giving masterclasses in Europe and the world.

This article uses material from the article Sergio Azzolini from the free encyclopedia Wikipedia and it is licensed under the GNU Free Documentation License.

Johann Strauss Ouvertüre zur Operette "Die Fledermaus"
Update Required To play the media you will need to either update your browser to a recent version or update your Flash plugin.