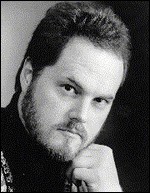 Ford was born in Lubbock, Texas, and studied at Texas Tech University, the University of Texas, and later as a member of the Houston Grand Opera Studio[1] in Houston, where he created Philip Glass's The Madrigal Opera in 1981.

He left for Europe, where he made his official operatic debut in Wuppertal in 1983, as Belmonte and Tamino, then in Mannheim in 1985, as Ferrando and Don Ramiro. In 1985, he also appeareared at the Grand Théâtre de Bordeaux as Almaviva, and the Aix-en-Provence Festival, as Lindoro.

He began specializing in the bel canto repertory notably Rossini, appearing at the Pesaro Festival and the Wexford Festival in roles such as Argirio in Tancredi, Uberto in La donna del lago, Rinaldo in Armida, Agorante in Ricciardo e Zoraide, Antenore in Zelmira, Erisso in Maometto II, Oreste in Ermione, etc.

In 1991, he sang in Mitridate, re di Ponto at the Royal Opera House in London. He also appeared at La Monnaie in Brussels, at La Scala in Milan, the Vienna State Opera, the Metropolitan Opera in New York, etc.

In the 1990s, he began a long collaboration with Opera Rara, appearing in numerous concert performances and recordings of rare operas by Donizetti, Mercadante, Mayr, Meyerbeer, Pacini.

This article uses material from the article Bruce Ford (tenor) from the free encyclopedia Wikipedia and it is licensed under the GNU Free Documentation License.

Josef Myslivecek Ouvertüre A-Dur
Update Required To play the media you will need to either update your browser to a recent version or update your Flash plugin.