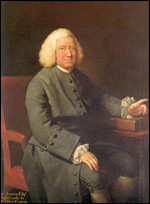 born in 1700 in Leicestershire, United Kingdom

Charles Jennens (1700 – 20 November 1773) was an English landowner and patron of the arts. As a friend of Handel, he helped author the libretti of several of his oratorios, most notably Messiah.

Jennens was brought up at Gopsall Hall in Leicestershire, the son of Charles Jennens and his second wife, Elizabeth Burdett.[1][2] He was educated at Balliol College, Oxford, matriculating in 1716, but did not graduate. A devout Christian and a non-juror, upholding the legitimacy of the deposed Stuart line.[1][2] He became interested in "primitive Christianity" and John Chrysostom. Jennens has been identified as an anti-Deist.[3] Richard Kidder's book A Demonstration of the Messias influenced him.

After his father's death in 1747, Jennens had Gopsall Hall completely rebuilt in the Palladian style, including within the estate an Ionic temple built in memory of his friend, the poet and classical scholar, Edward Holdsworth. Remaining unmarried, he was considered melancholic and extravagant, his neighbours calling him Suleyman the Magnificent.[1][4] As a non-juror, Jennens was ineligible for any public appointment, and he devoted himself to the arts, both as a collector of fine art (his collection was one of the best in Britain at the time) and a music patron.[2] George Friderick Handel's compositions were very much to his musical taste and they became close friends.[1] Handel visited him frequently at Gopsall Hall and in 1749 provided the specification for an organ for his home.[2][5] Thomas Hudson's portrait of Handel was commissioned by Jennens[2] – and the same artist's portrait of Charles Jennens is now in the Handel House Museum in London.[6]

After his death, Jennens' second cousin Heneage Finch, 3rd Earl of Aylesford, inherited his music library and much of it is now preserved in the Henry Watson Music Library at Manchester Central Library. It contains a large collection of manuscripts and published music by Handel and other contemporary composers, both English and Italian; there are 368 volumes of Handel manuscripts, and others include the autograph of Vivaldi's "Manchester" violin sonatas and an early manuscript of "The Four Seasons".[2][7] Jennens' extensive collection of books by Shakespeare, on literature, philology and theology was largely dispersed in a sale in 1918.[2][8]

Jennens' deep knowledge of the Bible and wide literary interest led him, from 1735, to prepare or contribute to libretti for Handel. These included Saul (1735–39), L'Allegro, il Penseroso ed il Moderato (1740–41), Messiah (1741–42), Belshazzar (1744–45) and, possibly, Israel in Egypt (1738–39). The libretti were freely given and always published anonymously. Saul and Belshazzar are said to "show an impressive gift for dramatic structure and characterization and the ability to wield political analogies adroitly."[2]

Well versed in music as well as literature, he annotated his copies of Handel's operas, adding corrections, bass figures, rejected pieces and dates. It is also clear that on occasions Handel was prepared to accept Jennens' suggestions and improvements to his compositions.[2][9]

The most famous collaboration is Jennens' libretto for Messiah, drawn entirely from the Bible, about 60% from the Old Testament (with occasional small alterations).[10] Musicologist Watkins Shaw describes it as "a meditation of our Lord as Messiah in Christian thought and belief", and which "amounts to little short of a work of genius".[11] Some attribute Messiah's emphasis on the Old Testament – and choice of the Old Testament title "Messiah" – to Jennens' theological beliefs.[3][12] Jennens was less than wholly approving of the musical setting, writing to Edward Holdsworth:

"I shall show you a collection I gave Handel, called Messiah, which I value highly. He has made a fine entertainment of it, though not near so good as he might and ought to have done. I have with great difficulty made him correct some of the grossest faults in the composition; but he retained his overture obstinately, in which there are some passages far unworthy of Handel, but much more unworthy of the Messiah."[13]

In the early 1770s Jennens commenced the preparation of scrupulous critical editions of Shakespeare plays, and the first time that these had been published individually and with editorial footnotes. He completed King Lear, Hamlet, Othello, Macbeth, and Julius Caesar before his death in 1773. These editions drew scorn, perhaps due to envy, from the Shakespeare editor George Steevens who severely attacked not only Jennens' work, but particularly his character: "The chief error of Mr. Jennens's life consisted in his perpetual association with a set of men every way inferior to himself. By these means he lost all opportunities of improvement, but gained what he preferred to the highest gratifications of wisdom – flattery in excess."[2][14]

This article uses material from the article Charles Jennens from the free encyclopedia Wikipedia and it is licensed under the GNU Free Documentation License.