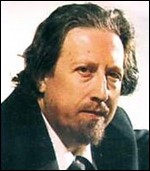 Lazar Naumovich Berman (Russian: Ла́зарь Нау́мович Бе́рман, Lazarʹ Naumovič Berman; February 26, 1930 – February 6, 2005) was a Soviet Russian classical pianist. He was hailed for a huge, thunderous technique that made him a thrilling interpreter of Liszt and Rachmaninoff and a late representative of the grand school of Russian Romantic pianism.

Berman was appointed an Honoured Artist of the RSFSR in 1988.

Berman was born to Jewish parents in Leningrad. His mother, Anna Lazarevna Makhover, had played the piano herself until prevented by hearing problems. She introduced her son to the piano, he entered his first competition at the age of three, and recorded a Mozart fantasia and a mazurka that he had composed himself at the age of seven, before he could even read music. Emil Gilels described him as a "phenomenon of the musical world". When Berman was nine, the family moved to Moscow so that he could study with Aleksandr Goldenweiser at the Conservatoire. The following year he made his formal debut playing Mozart's Piano Concerto No. 25 with the Moscow Philharmonic Orchestra. In 1941, students, pupils and parents were evacuated to Kuibishev, a city on the Volga, because of World War II. Living conditions were so poor that his mother had to cut the fingers from a pair of gloves to allow him to continue to practise without freezing his hands.

His playing of Chopin is well documented, in both a concert film and a DGG recording of the polonaises from the 1970s.[1][2][3]

He subsequently began to acquire a small international visibility. At the age of 12 he played Franz Liszt's La campanella to a British audience over the radio; in 1956 he won a prize at the Queen Elisabeth Music Competition in Belgium, with Vladimir Ashkenazy; and in 1958, he performed in London and recorded for Saga records.

Although he was known to international music aficionados who had heard the occasional recording on the Russian Melodiya record label, as well as those who visited the Soviet Union, he was not generally well known outside Russia before his 1975 American tour, organised by the impresario Jacques Leiser. His now legendary New York debut at the 92 Street Y, where he played Liszt's Transcendental Études, struck the music world like lightning. He became an overnight sensation. Before that, he had been generally restricted to the Soviet concert circuit, playing on old and decrepit pianos to audiences of varied degrees of interest. Invitations to tour outside the Soviet Union were ignored by the Soviet state concert agency, Gosconcert. He lived in a tiny two-room apartment in Moscow, with a grand piano occupying an entire room. But after his 1975 tour, he was immediately in great demand, with Deutsche Grammophon, EMI, and CBS vying to record him. He recorded the Tchaikovsky First Piano Concerto with Herbert von Karajan, as well as broadcasting it on international television with Antal Doráti, to mark United Nations Day in 1976.

Most of his British appearances came in the late 1970s and early 1980s. In December 1976, he performed music by Sergei Prokofiev and Franz Liszt at the Royal Festival Hall.

This article uses material from the article Lazar Berman from the free encyclopedia Wikipedia and it is licensed under the GNU Free Documentation License.