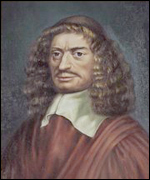 Giacomo Carissimi (baptized 18 April 1605 – 12 January 1674) was an Italian composer and music teacher. He is one of the most celebrated masters of the early Baroque or, more accurately, the Roman School of music. Carissimi established the characteristic features of the Latin oratorio and was a prolific composer of motets and cantatas. He was highly influential in musical developments in north European countries through his pupils and the wide dissemination of his music.[1]

Nothing is known of his early musical training. His first known appointments were at Tivoli Cathedral, under the maestri di cappella Aurelio Briganti Colonna, Alessandro Capece and Francesco Manelli; from October 1623 he sang in the choir, and from October 1624 to October 1627 he was the organist. In 1628 Carissimi moved north to Assisi, as maestro di cappella (chapel master) at the Cathedral of San Rufino.[1] In 1628 he obtained the same position at the church of Sant'Apollinare belonging to the Collegium Germanicum in Rome, which he held until his death. This was despite him receiving several offers to work in very prominent establishments, including an offer to take over from Claudio Monteverdi at San Marco di Venezia in Venice. In 1637 he was ordained a priest. He seems to have never left Italy at all during his entire lifetime. He died in 1674 in Rome.[2]

Carissimi's successor as maestro di cappella at the Collegium Germanicum in 1686 described him as tall, thin, very frugal in his domestic affairs, with very noble manners towards his friends and acquaintances, and prone to melancholy.[3]

Carissimi's position in the history of church, vocal and chamber music is somewhat similar to that of Francesco Cavalli in the history of opera. While Luigi Rossi was his predecessor in developing the chamber cantata, Carissimi was the composer who first made this form the vehicle for the most intellectual style of chamber music, a function which it continued to perform until the death of Alessandro Scarlatti, Emanuele d'Astorga and Benedetto Marcello.

Carissimi is also noted as one of the first composers of oratorios, with Jephte as probably his best known work, along with Jonas. These works and others are important for establishing the form of oratorio unaccompanied by dramatic action, which maintained its hold for 200 years. The name comes from their presentation at the Oratory of Santissimo Crocifisso in Rome. He may also be credited for having given greater variety and interest to the instrumental accompaniments of vocal compositions. Charles Burney and John Hawkins both published specimens of his compositions in their works on the history of music, while Henry Aldrich collected an almost complete set of his compositions, which are currently housed at the library of Christ Church, Oxford. The British Museum also possesses numerous works by Carissimi. Most of his oratorios are in the Bibliothèque Nationale at Paris.

Carissimi was active at the time when secular music was about to usurp the dominance of sacred music in Italy. The change was decisive and permanent. When Carissimi began composing, the influence of the previous generations of Roman composers was still heavy (for instance, the style of Palestrina) and when his career came to a close the operatic forms, as well as the instrumental secular forms, were predominant. In addition, Carissimi was important as a teacher, and his influence spread far into Germany and France. Much of the musical style of Marc-Antoine Charpentier, for instance, was influenced by Carissimi.

Samuel Pepys was delighted with Carissimi's music. His Diary records that he met "Mr. Hill, and Andrews, and one slovenly and ugly fellow, Seignor Pedro, who sings Italian songs to the theorbo most neatly, and they spent the whole evening in singing the best piece of musique counted of all hands in the world, made by Seignor Charissimi, the famous master in Rome. Fine it was, indeed, and too fine for me to judge of."[5]

Carissimi is the viewpoint character for the "Euterpe" series of short stories by Enrico M. Toro within the 1632 series of books edited by Eric Flint.

This article uses material from the article Giacomo Carissimi from the free encyclopedia Wikipedia and it is licensed under the GNU Free Documentation License.