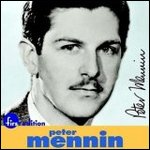 Peter Mennin (born Mennini) (May 17, 1923, Erie, Pennsylvania – June 17, 1983, New York City) was an American composer and teacher of Italian descent. He directed the Peabody Conservatory in Baltimore, then for many years ran the Juilliard School, succeeding William Schuman in this role. He began composing at an early age, and wrote nine symphonies, several concertos, and numerous works for wind band, chorus, and other ensembles. His style became more chromatic and astringent with time, but was always essentially tonal, relying heavily on polyphony.

Mennin's fifth symphony of 1950, which is tonal, energetic and suspenseful, was recorded by Howard Hanson and the Eastman Rochester Orchestra in the Mercury series of American classical works.

His work received renewed attention in the CD era, and now all his symphonies have been recorded (except for the withdrawn #1 and #2).

Juilliard awards a Peter Mennin prize, for Outstanding Achievement and Leadership in Music.

This article uses material from the article Peter Mennin from the free encyclopedia Wikipedia and it is licensed under the GNU Free Documentation License.

Friedrich Hartmann Graf Flötenkonzert G-Dur
Update Required To play the media you will need to either update your browser to a recent version or update your Flash plugin.