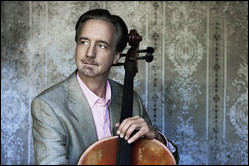 Born into a family of cellists, David Finckel began his musical studies with his father, Edwin Finckel. At the age of 15 he made his debut with the Philadelphia Orchestra in Tchaikovsky's Rococo Variations as winner of the orchestra's junior competition, and two years later returned to capture the senior division prize and another appearance with the orchestra, playing the Schumann Concerto. At 17, David played for Mstislav Rostropovich, and soon after became the great cellist's first American pupil. His studies spanned a nine-year period, culminating in a performance of Prokofiev's Sinfonia Concertante with the Basel Symphony under Rostropovich's direction. He was the first winner of the New England Conservatory Piatigorsky Artist Award, chosen from an international field for his excellence as soloist, chamber musician, and teacher. Since 1979, David has been a member of the award-winning Emerson String Quartet.[2]

David performs and records frequently in collaboration with pianist Wu Han, whom he married in 1985. Since the 1990s, the two artists have toured widely year-round and have emerged as one of the most popular cello-piano duos on the musical scene today. Notable duo concerts include their performances of the complete Beethoven cycle throughout the world as well as appearing on all the major series in the United States. David and Wu Han also often appear in concert with violinist Philip Setzer.[3]

A member of the Emerson String Quartet since 1979, David has participated in over thirty acclaimed recordings produced with Deutsche Grammophon since 1987, nine Grammy Awards (including two for best classical album, an unprecedented honor for a chamber music group), three Gramophone Awards, the coveted Avery Fisher Prize and cycles of the complete Beethoven, Bartók, Mendelssohn and Shostakovich string quartets in the world's musical capitals. The Emerson String Quartet took its name from the American poet and philosopher Ralph Waldo Emerson. Besides David Finckel on the cello, the Emerson String Quartet is composed of violinists Eugene Drucker and Philip Setzer who alternate in the first chair position and violist Lawrence Dutton.[4] Finckel ended his tenure at the quartet at the conclusion of the 201213 season; he was replaced by Paul Watkins.[5]

In addition to his distinction as an accomplished performer, David has established a reputation for his dynamic and innovative approach to the recording studio. In 1997, David Finckel and Wu Han launched ArtistLed, classical musics first musician-directed and Internet-based recording company, whose catalogue of sixteen albums has won widespread acclaim. BBC Music magazine saluted the launch by featuring the companys debut album on the cover of its January 1997 issue. David is a controlling participant in every aspect of the recording process, from selecting the repertoire and recording venue to setting the sound, running the sessions, constructing the edits, and determining the final mix. ArtistLeds Grammy-award winning recording engineer is Da-Hong Seetoo.[6]

In 2003, David Finckel co-founded Music@Menlo, an annual chamber music festival and institute in Silicon Valley that brings to the San Francisco Bay area a lineup of accomplished musicians, scholars, educators, and musicologists, as well as a roster of gifted young artists, for an immersive three-week chamber music experience in the summer.[7][8]

David was instrumental in the formation of Music@Menlos innovative live recording series, Music@Menlo LIVE, which commercially releases live recordings from the festival each year. The label was launched in 2004 and has been praised as, probably the most ambitious recording project of any classical music festival in the world (San Jose Mercury News).[9]

In 2004, David Finckel was appointed co-Artistic Director of The Chamber Music Society of Lincoln Center in New York City, where he currently presents some 200 concerts, lectures, master classes, and outreach events each season. The Chamber Music Society is recognized among the most important leaders in the field of chamber music in North America. In 2013, David was invited to extend his appointment for a third five-year term, making for the longest artistic director tenure since that of founding Artistic Director Charles Wadsworth. Since becoming co-artistic director, CMS has expanded its recording and touring initiatives, establishing performance and educational residencies across the United States, Asia and Europe.[10]

In 2011, David Finckel became codirector of Chamber Music Today, an annual chamber music festival and institute in Seoul, Korea that brings to the Far East the world's greatest chamber musicians.[11]

In 2004, David Finckel created the Chamber Music Institute at Music@Menlo. The institute offers a rigorous professional training ground and a wide array of performance opportunities to gifted young musicians who have been selected from conservatories, youth orchestras, and music programs nationally and internationally.[12]

David has presented master classes at venerable institutions throughout the world and, for many years, taught alongside the late Isaac Stern at Carnegie Hall and the Jerusalem Music Center. He has also served as a member of the artist-faculty at the Aspen Music Festival and School for many years, and in various educational outreach programs across the country. David also created Cello Talks, an innovative series of videos about every aspect of cello playing.[14] For two decades, with the Emerson String Quartet, David taught at the University of Hartfords Hartt School of Music.[15]

In 2002, David and the Emerson String Quartet joined the faculty of Stony Brook University where he coaches chamber music, gives master classes, and provides instrumental instruction.[16] David joined the Juilliard cello faculty in 2012.

This article uses material from the article David Finckel from the free encyclopedia Wikipedia and it is licensed under the GNU Free Documentation License.

Joseph Haydn Sinfonie Nr. 103 Es-Dur "Mit dem Paukenwirbel"
Update Required To play the media you will need to either update your browser to a recent version or update your Flash plugin.