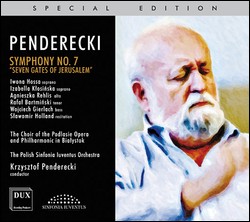 Born in Dębica to a lawyer, Penderecki studied music at Jagiellonian University and the Academy of Music in Kraków. After graduating from the Academy of Music, Penderecki became a teacher at the academy and he began his career as a composer in 1959 during the Warsaw Autumn festival. His Threnody to the Victims of Hiroshima for string orchestra and the choral work St. Luke Passion, have received popular acclaim. His first opera, The Devils of Loudun, was not immediately successful. Beginning in the mid-1970s, Penderecki's composing style changed, with his first violin concerto focusing on the semitone and the tritone. His choral work Polish Requiem was written in the 1980s, with Penderecki expanding it in 1993 and 2005.

Penderecki was born in Dębica, to Tadeusz Penderecki, a lawyer, and Zofia (née Wittgenstein). Penderecki's grandfather, Robert Berger, was a highly talented painter and director of the local bank at the time of Penderecki's birth; Robert's father Johann moved to Dębica from Breslau (now Wrocław) in the mid-19th century.[3] His grandmother was an Armenian[4] from Isfahan, Iran. Penderecki used to go to the Armenian Church in Kraków with her.[5] Penderecki was the youngest of three siblings; his sister, Barbara, was married to a mining engineer, and his older brother, Janusz, was studying law and medicine at the time of his birth. Tadeusz was a violinist and also played piano.[3] In 1939, the Second World War broke out, and Penderecki's family moved out of their apartment as the Ministry of Food was to operate there. After the war, Penderecki began attending grammar school in 1946. He began studying the violin under Stanisław Darłak, Dębica's military bandmaster who organized an orchestra for the local music society after the war.[6] Upon graduating from grammar school, Penderecki moved to Kraków in 1951, where he attended Jagiellonian University.[6] He studied violin with Stanisław Tawroszewicz and music theory with Franciszek Skołyszewski.[7] In 1954, Penderecki entered the Academy of Music in Kraków and, having finished his studies on violin after his first year, focused entirely on composition. Penderecki's main teacher there was Artur Malawski, a composer known for his choral works and orchestral works, as well as chamber music and songs. After Malawski's death in 1957, Penderecki took further lessons with Stanisław Wiechowicz, a composer primarily known for his choral works.[8] At the time, the 1956 overthrow of Stalinism in Poland lifted strict Communist cultural censorship and opened the door to a wave of creativity.[9]

On graduating from the Academy of Music in Kraków in 1958, Penderecki took up a teaching post at the Academy. His early works show the influence of Anton Webern and Pierre Boulez (Penderecki has also been influenced by Igor Stravinsky). Penderecki's international recognition began in 1959 at the Warsaw Autumn with the premieres of the works Strophen, Psalms of David, and Emanations, but the piece that truly brought him to international attention was Threnody to the Victims of Hiroshima (see threnody and atomic bombing of Hiroshima), written in 1960 for 52 string instruments. In it, he makes use of extended instrumental techniques (for example, playing behind the bridge, bowing on the tailpiece). There are many novel textures in the work, which makes great use of tone clusters. He originally titled the work 8' 37", but decided to dedicate it to the victims of Hiroshima.

Fluorescences followed a year later; it increases the orchestral density with more wind and brass, and an enormous percussion section of 32 instruments for six players including a Mexican güiro, typewriters, gongs and other unusual instruments. The piece was composed for the Donaueschingen Festival of contemporary music of 1962, and its performance was regarded as provocative and controversial. Even the score appeared revolutionary; the form of graphic notation that Penderecki had developed rejected the familiar look of notes on a staff, instead representing music as morphing sounds.[9] His intentions at this stage were quite Cagean: "All I'm interested in is liberating sound beyond all tradition."[10] This preoccupation with sound culminated in De Natura Sonoris I, which frequently calls upon the orchestra to use non-standard playing techniques to produce original sounds and colours. A sequel, De Natura Sonoris II, was composed in 1971: with its more limited orchestra, it incorporates more elements of post-Romanticism than its predecessor. This foreshadowed Penderecki's renunciation of the avant-garde in the mid-1970s, although both pieces feature dramatic glissandos, dense clusters, and a use of harmonics, and unusual instruments (the musical saw features in the second piece).

The large-scale St. Luke Passion (1963–66) brought Penderecki further popular acclaim, not least because it was devoutly religious, yet written in an avant-garde musical language, composed within Communist Eastern Europe. Western audiences saw it as a snub to the Soviet authorities. Various different musical styles can be seen in the piece. The experimental textures, such as were seen in the Threnody, are balanced by the work's Baroque form and the occasional use of more traditional harmonic and melodic writing. Penderecki makes use of serialism in this piece, and one of the tone rows he uses includes the BACH motif, which acts as a bridge between the conventional and more experimental elements. The Stabat Mater section toward the end of the piece concludes on a simple chord of D major, and this gesture is repeated at the very end of the work, which finishes on a triumphant E major chord. These are the only tonal harmonies in the work, and both come as a surprise to the listener; Penderecki's use of tonal triads such as these remains a controversial aspect of the work.

Penderecki continued to write pieces that explored the sacred in music. In the early 1970s he wrote a Dies irae, a Magnificat, and Canticum Canticorum Salomonis (Song of Songs) for chorus and orchestra.[10]

Around the mid-1970s, while he was a professor at the Yale School of Music,[14] Penderecki's style began to change. The Violin Concerto No. 1 largely leaves behind the dense tone clusters with which he had been associated, and instead focuses on two melodic intervals: the semitone and the tritone. This direction continued with the Symphony No. 2, Christmas (1980), which is harmonically and melodically quite straightforward. It makes frequent use of the tune of the Christmas carol Silent Night.

Penderecki explained this shift by stating that he had come to feel that the experimentation of the avant-garde had gone too far from the expressive, non-formal qualities of Western music: 'The avant-garde gave one an illusion of universalism. The musical world of Stockhausen, Nono, Boulez and Cage was for us, the young – hemmed in by the aesthetics of socialist realism, then the official canon in our country – a liberation...I was quick to realise however, that this novelty, this experimentation and formal speculation, is more destructive than constructive; I realised the Utopian quality of its Promethean tone'. Penderecki concluded that he was 'saved from the avant-garde snare of formalism by a return to tradition'.[10]

In 1980, Penderecki was commissioned by Solidarity to compose a piece to accompany the unveiling of a statue at the Gdańsk shipyards to commemorate those killed in anti-government riots there in 1970. Penderecki responded with Lacrimosa, which he later expanded into one of the best known works of his later period, the Polish Requiem (1980–84, 1993, 2005). Again the harmonies are rich, although there are moments which recall his work in the 1960s. In recent years, he has tended towards more traditionally conceived tonal constructs, as heard in works such as the Cello Concerto No. 2 and the Credo. He conducted Credo on the occasion of the 70th birthday of Helmuth Rilling, 29 May 2003.[15] In celebration of his 75th birthday he conducted three of his works at the Rheingau Musik Festival in 2008, among them Ciaccona from the Polish Requiem.[16]

In 2001, Penderecki's Credo received the Grammy Award for best choral performance for the world-premiere recording made by the Oregon Bach Festival, which commissioned the piece. The same year, Penderecki was awarded with the Prince of Asturias Prize in Spain, one of the highest honours given in Spain to individuals, entities, organizations or others from around the world who make notable achievements in the sciences, arts, humanities, or public affairs. Invited by Walter Fink, he was the eleventh composer featured in the annual Komponistenporträt of the Rheingau Musik Festival in 2001. Penderecki received an honorary doctorate from the Seoul National University, Korea in 2005, as well as from the University of Münster, Germany in 2006. His notable students include Chester Biscardi and Walter Mays.

He is currently engaged in the creation of a choral work to coincide with the Armenian Genocide centennial.[5]

Penderecki has three children, a daughter from his first marriage by his pianist first wife,[17] and a son and daughter with his current wife, Elżbieta Penderecka (née Solecka), whom he married in 1965.culture.pl He lives in the Kraków suburb of Wola Justowska. He is working on an opera based on Phèdre by Racine for 2014 and wishes to write a 9th symphony.[18]

Some of Penderecki's music has been adapted for film soundtracks. The Exorcist (1973) features his String Quartet and Kanon For Orchestra and Tape; fragments of the Cello Concerto and The Devils of Loudun. Writing about The Exorcist, the film critic for The New Republic wrote "even the music is faultless, most of it by Krzysztof Penderecki, who at last is where he belongs."[20] The Shining (1980) features six pieces of Penderecki's music: Utrenja II: Ewangelia, Utrenja II: Kanon Paschy, The Awakening of Jacob, De Natura Sonoris No. 1, De Natura Sonoris No. 2 and Polymorphia.[21] David Lynch has used Penderecki's music in the soundtracks of the movies Wild at Heart (1990), Inland Empire (2006), and the TV series Twin Peaks (2017). In the film Fearless (1993) by Peter Weir, the piece Polymorphia was once again used for an intense plane crash scene seen from the point of view of the passenger played by Jeff Bridges. Penderecki's piece, Threnody for the Victims of Hiroshima, was also used during one of the final sequences in the film Children of Men (2006). Penderecki composed music for Andrzej Wajda's 2007 Academy Award nominated film Katyń, while Martin Scorsese's Shutter Island (2010) featured his Symphony No. 3 and Fluorescences.

This article uses material from the article Krzysztof Penderecki from the free encyclopedia Wikipedia and it is licensed under the GNU Free Documentation License.