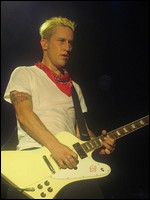 Christopher Aubrey "Chris" Shiflett (born May 6, 1971 in Santa Barbara, California) is best known as the lead guitarist for the rock band Foo Fighters. He is the younger brother of musician Scott Shiflett.

Shiflett joined Foo Fighters after the release of their third album, There Is Nothing Left to Lose. The first album he played on was One by One. Prior to joining the Foo Fighters, Shiflett was resident lead guitarist for the San Francisco Bay Area punk rock band No Use for a Name. The Foo Fighters had lost both of their previous guitarists, Pat Smear (who played in punk legends The Germs and had been Nirvana's touring guitarist) and his Foos replacement, Dave Grohl's former Scream bandmate Franz Stahl, and were holding open auditions. Seeing an opportunity that he knew he could not pass up, he quickly parted ways with his former band to audition.

His departure was abrupt, as No Use for a Name were just about to head out on tour in support of their then-recent album More Betterness!. He was replaced by Dave Nassie, who had previously contributed to Suicidal Tendencies lead singer "Cyco" Mike Muir's solo projects. Shiflett began his music career in another band called Lost Kittenz with current members of Sugarcult. He also currently plays in the punk rock cover band Me First and the Gimme Gimmes, his own side-project, Jackson United as well as Viva Death with his brother Scott. For numerous projects, Shiflett performed under the name Jake Jackson.

Shiflett, after being in cover band Me First and the Gimme Gimmes, has a tattoo on the inside of his bottom lip with the words "Gimme Gimme".

In 2009 Shiflett played in a band called The Real McCoy, which was founded by Andy McCoy, the guitarist of the former Finnish rock band Hanoi Rocks. The band split up after only three gigs[2].

In 2010 Shiflett created a new country-oriented side project, Chris Shiflett & the Dead Peasants, releasing a self-titled album in July.

This article uses material from the article Chris Shiflett from the free encyclopedia Wikipedia and it is licensed under the GNU Free Documentation License.