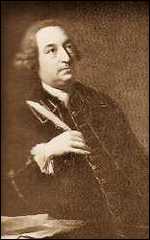 born in 1712 in Ansbach, Bayern, Germany

John Christopher Smith was the son of Johann Christoph Schmidt (John Christopher Smith Sr.) (died 1763), Handel's first copyist in London. His father, known to Handel from Halle, was summoned from Germany in 1716. He brought his family to London around 1720. John Christopher Smith, junior, later became Handel's secretary, musical assistant and amanuensis, when blindness prevented Handel from writing or conducting in his later years. From 1753 to 1759, he conducted Handel's oratorios that were to be performed in those years. The last year where Handel conducted performances of his oratorios was 1752. Handel bequeathed to the Smith family his collection of keyboard instruments in his house at 25 Brook Street. Smith had a few lessons from Handel and Johann Christoph Pepusch but studied mostly with Thomas Roseingrave. He retired to Bath in the 1770s.

Smith's first opera was the Italian-style Ulysses (1733); later ones included two written for David Garrick and based on Shakespeare - The Fairies (1755), after A Midsummer Night's Dream, and The Tempest (1756) - and a successful afterpiece, The Enchanter (1760). Several others remained unperformed. Between 1759 and 1768 he directed the annual performances of Messiah at the Foundling Hospital, where he was organist. Of his own oratorios, mostly written in the 1760s, Paradise Lost (1760) was the greatest success (with words by Benjamin Stillingfleet); three later ones (Nabal, Rebecca, and Gideon) were largely reworkings of Handel's music. Among his other works are five volumes of harpsichord music (1732-1763) and a funeral service (1772) for the dowager Princess of Wales, who was his harpsichord pupil.

This article uses material from the article John Christopher Smith from the free encyclopedia Wikipedia and it is licensed under the GNU Free Documentation License.