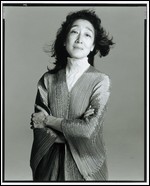 Dame Mitsuko Uchida, DBE (内田光子, [ɯtɕiꜜda miꜜtsɯ̥ko]), born 20 December 1948) is a classical pianist and conductor, born in Japan and naturalised in Britain, particularly noted for her interpretations of Mozart and Schubert.

She has appeared with many notable orchestras, recorded a wide repertory with several labels, won numerous awards and honours (including Dame Commander of the Order of the British Empire in 2009), and has since 2013 been Artistic Director of the Marlboro Music School and Festival, the only musician to be its sole Artistic Director since co-founder Rudolf Serkin.[1] She has also conducted several major orchestras.

Born in Atami, a seaside town close to Tokyo, Japan, Uchida moved to Vienna, Austria, with her diplomat parents when she was 12 years old, after her father was named the Japanese ambassador to Austria. She enrolled at the Vienna Academy of Music to study with Richard Hauser, and later Wilhelm Kempff and Stefan Askenase,[2] and remained in Vienna to study when her father was transferred back to Japan after five years. She gave her first Viennese recital at the age of 14 at the Vienna Musikverein. She also studied with Maria Curcio, the last and favourite pupil of Artur Schnabel.[3][4]

In 1998 Uchida was the Music Director of the Ojai Music Festival in conjunction with conductor and violinist, David Zinman.

She is an acclaimed interpreter of the works of Mozart, Beethoven, Schubert, Chopin, Debussy and Schoenberg. She has recorded all of Mozart's piano sonatas (a project that won the Gramophone Award in 1989), and concerti, the latter with the English Chamber Orchestra, conducted by Jeffrey Tate. Her recording of the Schoenberg Piano Concerto with Pierre Boulez won another Gramophone Award. Uchida is further noted for her recordings of Beethoven's complete piano concerti with Kurt Sanderling conducting, Beethoven's late piano sonatas, and a Schubert piano cycle. She is also respected as a distinguished interpreter of the works of the Second Viennese School.[5]

Her 2009 recording of the Mozart piano concertos nos. 23 and 24, in which she conducted the Cleveland Orchestra as well as playing the solo part, won the Grammy Award in 2011.[6] This recording was the start of a project to record all the Mozart piano concertos for a second time, conducting the Cleveland Orchestra from the piano. Further recordings for this project were released in 2011, 2012 and 2014.[7]

From 2002 to 2007 she was artist-in-residence for the Cleveland Orchestra, where she led performances of all of Mozart's solo piano concertos. She has also conducted the English Chamber Orchestra, from the keyboard. In 2010, she was artist-in-residence for the Berlin Philharmonic. She was senior artist at the Marlboro Music School and Festival in 1974 and 1992, and has been permanently associated with Marlboro since 1994 when she became a member of the Committee for Artistic Direction. In 1999 she became one of two Artistic Directors along with fellow pianist Richard Goode. Since 2013 she has been sole Artistic Director.[8] She is also a founding trustee of the Borletti-Buitoni Trust, an organisation established to help young artists develop and sustain international careers.[9] In May 2012, the Royal Philharmonic Society announced that she would be honoured with their Gold Medal (she received the society's annual Music Award in 2003); previous recipients have included Johannes Brahms (1877), Frederick Delius and Sir Edward Elgar (1925), Richard Strauss (1936), Igor Stravinsky (1954), Benjamin Britten and Leonard Bernstein (1987).

Call it the mark of a master. Just when Mitsuko Uchida was starting to seem predictable, the goddess of purity, the pianist goes and exhibits another persona altogether. Performing Mozart again with the Cleveland Orchestra Thursday, the pianist-conductor treated listeners to a heartier, more robust version of her art. More than just the layout of the strings, she rearranged, in a refreshing manner, her very sound.[10]

This article uses material from the article Mitsuko Uchida from the free encyclopedia Wikipedia and it is licensed under the GNU Free Documentation License.

Johann Sebastian Bach Aria und 1. Variation aus Goldberg Variationen BWV 988
Update Required To play the media you will need to either update your browser to a recent version or update your Flash plugin.