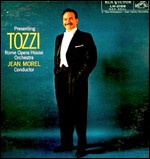 Giorgio Tozzi (January 8, 1923 May 30, 2011) was an American operatic bass. He was a mainstay for many years with the Metropolitan Opera, and sang principal bass roles in nearly every major opera house worldwide.

Tozzi was born George John Tozzi in Chicago, Illinois.[1] He studied at DePaul University with Rosa Raisa, Giacomo Rimini and John Daggett Howell, making his professional debut in the Broadway production of Britten's The Rape of Lucretia in 1948 as Tarquinius. His signature roles included Figaro in Mozart's The Marriage of Figaro, Phillip II in Verdi's Don Carlos, Hans Sachs in Wagner's Die Meistersinger von Nürnberg, and Méphistophélès in Gounod's Faust.

In 1957 he portrayed the title role in a nationally broadcast performance of Mussorgsky's Boris Godunov with the NBC Opera Theatre.[2] In 1958 he created the role of The Doctor in Barber's Vanessa.

After dubbing the singing parts for the character of Emile de Becque (acted by Rossano Brazzi) in the 1958 film version of South Pacific, Tozzi spent many years playing the role of de Becque himself in various revivals and road tours of the show, including one at Lincoln Center in the late 1960s. In 1980, Tozzi earned a Tony Award nomination for Best Leading Actor in a Musical for his work as Tony in The Most Happy Fella.

Tozzi was twice married. He first married Catherine Dieringer, who predeceased him; in 1967 he married Monte Amundsen, a singer, with whom he had a son and a daughter.[4]

Tozzi died on May 30, 2011, in Bloomington, Indiana, aged 88, of a heart attack. He was survived by Amundsen, their children, Eric Tozzi and Jennifer Tozzi Hauser, and three grandchildren.[5][6]

This article uses material from the article Giorgio Tozzi from the free encyclopedia Wikipedia and it is licensed under the GNU Free Documentation License.

Ludwig van Beethoven Sinfonie Nr.3 Es-Dur Op.55
Update Required To play the media you will need to either update your browser to a recent version or update your Flash plugin.