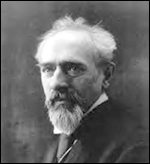 He was born in Moscow, where his father was an insurance official. His parents were Swiss, and he went to a German Primary school in Moscow. He entered the Moscow Conservatory in 1889, where he studied violin with Jan Hřímalý[1] and composition with Anton Arensky[1] and Sergei Taneyev.[1] He completed his studies at the Hochschule für Musik in Berlin, under Woldemar Bargiel.[1] His first (privately) printed works, two Romanzen (lieder) appeared in 1894, the year he began studies with Bargiel. During his time in Berlin he was a composition professor, employed by Joseph Joachim;[1] his students included Hans Chemin-Petit, Werner Richard Heymann, Nikos Skalkottas, Henry Jolles, Pancho Vladigerov, Philipp Jarnach, Heinrich Kaminski, Lauri Ikonen, Max Trapp, Yrjö Kilpinen, Gerhart von Westerman, Hans Moltkau, Giannis Konstantinidis, Wilhelm Guttmann, Stefan Wolpe and Gunnar Johansen. He retired to Switzerland in 1934, and died in Vevey.[1]

His works include sonatas for viola, cello, winds, and three for violin (the third was recorded on a multi-LP set called Musik zwischen den Kriegen : eine Berliner Dokumentation), four symphonies (including one in manuscript) and also a chamber symphony, four string quartets, several piano trios, piano quartets and piano quintets as well as one sextet for piano and strings from 1902 and a wind quintet, a number of concerted works including three violin concerti and a triple concerto with piano trio, many piano works and lieder, and a number of stage works including an opera Aleko.

Several of these works have been recorded on compact disc, including some of the sonatas, two of the concertos, two of the symphonies, all four string quartets and all of the piano trios. He is known to have orchestrated Johannes Brahms' Hungarian Dance No. 4.

He also translated Arensky's 'Practical Studies in Harmony' into German.[2]

He was twice married. His younger brother Konstantin Yuon was a notable painter.

This article uses material from the article Paul Juon from the free encyclopedia Wikipedia and it is licensed under the GNU Free Documentation License.

François-Joseph Gossec Sanctus und Pie Jesu aus "Grande Messe des Morts"
Update Required To play the media you will need to either update your browser to a recent version or update your Flash plugin.