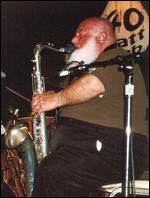 After decades of obscurity, Maneri's distinctive saxophone and clarinet works gained praise and relative fame in the 1990s. To conventional Western sensibilities, some of his passages may sound 'out-of-tune'- but there is a consistent, internal logic to his unorthodox playing; critic Charlie Wilmoth describes Maneri's playing as "a slippery, space-filled alien blues".[1]

An Italian-American born and raised in Brooklyn, Maneri played clarinet and saxophone in various dance bands and on the Catskill circuit as a teenager, often performing traditional Greek, Turkish, and Syrian music or Klezmer at weddings and other gatherings. He would later incorporate some elements of such music in his own compositions. He studied with Josef Schmid (not the tenor but a conductor and student of Alban Berg) for a decade before being commissioned by conductor Erich Leinsdorf to write a piano concerto for the Boston Symphony Orchestra, which was rehearsed but never performed in concert.

Maneri was impressed by the music of Arnold Schoenberg and organized a jazz ensemble that performed some twelve tone music. (His later music is, however, not in the twelve-tone technique.) In 1963, this quartet recorded a demo for Atlantic Records, due in part to Gunther Schuller's interest in Maneri. The recording was not released until 1998, when American Splendor writer Harvey Pekar — who had obtained a copy of the demo — played the music for composer John Zorn, who released the music on his Avant Records as Paniots Nine. The recording shows a synthesis of Maneri's experience with vernacular musics of American immigrants and his understanding of twelve-tone composition along with a developed style of "free" improvisation, analogous to the contemporaneous innovations by Sun Ra and Ornette Coleman. In 1965, he performed, as soloist, a piece composed by David Reck. dedicated to Coleman and conducted by Schuller at Carnegie Hall. Little else was heard from him until he was hired, at the behest of Schuller, to teach at the New England Conservatory of Music in 1970. He led one of the few microtonal composition courses in the United States (Jamie Saft, Cuong Vu, Judith Berkson, Noah Kaplan, Bhob Rainey, Katt Hernandez, Tim Crofts,composer Randall Woolf and Matthew Shipp have been among his students). In 1985 he co-wrote (along with Scott Van Duyne) and published the workbook Preliminary Studies in the Virtual Pitch Continuum. He was also part of the 80s klezmer revival in New England.

Maneri continued his teaching, but performed and recorded rarely until the early 1990s, when his son Mat Maneri coaxed him into more public appearances. Joe said, "I had an experimental microtonal sextet about 15 years ago, which would practice in my house. One night, when he was 14, Mat came down from his bedroom with his violin and joined us. He was already the best player in the group. He set a pace for the rest of us." As Mat says, "Even, then, I thought of my role as being a bridge between this and that — Joe being 'that'."

Maneri gained significant attention, and released a number of recordings, often on ECM Records. His recorded music is informed by his microtonal theories and compositions which use 72 equal temperament, the equal division of the octave in 72 parts, although he doesn't confine himself to that temperament in performance: "We don't use theories when we play. We can't. We are those things. If they took X-rays of us, you would see all of the music inside" (Blumenthal, 1999).

In 1999, Tales of Rohnlief marked the recording debut of Maneri's own constructed language.

Writer Harvey Pekar — a longtime fan of Maneri — insisted Maneri's music be featured in the film version of his comic book American Splendor.

In 2003, 24 of Maneri's poems, written in his own language, were included in the anthology Asemia.

On May 17, 2009, three months before his death, Maneri was awarded an Honorary Doctorate from New England Conservatory. He died of complications from heart surgery on August 24, at the Beth Israel Deaconess Medical Center, Boston.

Joe Maneri is also on a recording with JacK Reilly titled "MASKS" . Joe and Jack play duets on two tracks.It is released on the Unichrom label.

This article uses material from the article Joe Maneri from the free encyclopedia Wikipedia and it is licensed under the GNU Free Documentation License.