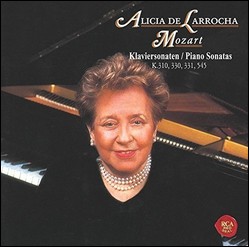 Alicia de Larrocha y de la Calle (23 May 1923 – 25 September 2009) was a Spanish pianist and composer. She was considered one of the great piano legends of the 20th century. Reuters called her "the greatest Spanish pianist in history",[1] Time "one of the world's most outstanding pianists"[2] and The Guardian "the leading Spanish pianist of her time".[3]

She won multiple Grammy Awards and a Prince of Asturias Award for the Arts. She is credited with bringing greater popularity to the compositions of Isaac Albéniz and Enrique Granados.[1] In 1995, she became the first Spanish artist to win the UNESCO Prize.[3]

Alicia de Larrocha was born in Barcelona, Catalonia, Spain.[4] She began studying piano with Frank Marshall at the age of three. Both her parents were pianists and she was also the niece of pianists.[2][4] Beginning her career at the age of three, she gave her first public performance at the age of five at the International Exposition in Barcelona.[2] She performed her first concert at the age of six at the World's Fair in Seville in 1929, and had her orchestral debut at the age of 11. By 1943, her performances were selling out in Spain.[2] She began touring internationally in 1947, and in 1954 toured North America with the Los Angeles Philharmonic. In 1969, de Larrocha performed in Boston for the Peabody Mason Concert series.[5] In 1966 she engaged in a first strenuous tour of Southern Africa which proved so wildly popular that three further tours were completed [6]

De Larrocha, writes Jed Distler, "started composing at age seven and continued on and off until her 30th year, with a prolific spurt in her late teens," and while she never performed her works in public, she gave her family the choice of making them available after her death, which they have done.[7]

De Larrocha made numerous recordings of the solo piano repertoire and in particular the works of composers of her native Spain. She is best known for her recordings of the music of Manuel de Falla, Enrique Granados, Federico Mompou, and Isaac Albéniz, as well as her 1967 recordings of Antonio Soler's keyboard sonatas. She recorded for Hispavox, CBS/Columbia/Epic, BMG/RCA and London/Decca, winning her first Grammy Award in 1975 and her last one in 1992, at the age of almost seventy. She received the Prince of Asturias Award for the Arts in 1994.[2]

De Larrocha spoke in a 1978 interview with Contemporary Keyboard, “I don’t believe there is a ‘best’ of anything in this life. I would say, though, that Granados was one of the great Spanish composers, and that, in my opinion, he was the only one that captured the real Romantic flavor. His style was aristocratic, elegant and poetic — completely different from Falla and Albéniz. To me, each of them is a different world. Falla was the one who really captured the spirit of the Gypsy music. And Albéniz, I think was more international than the others. Even though his music is Spanish in flavor, his style is completely Impressionistic.”[8]

Less than five feet tall and with small hands for a pianist,[1][2] in her younger years she was nonetheless able to tackle all the big concertos (all five by Beethoven, Liszt's No. 1, Brahms's No. 2, Rachmaninoff's Nos. 2 and 3, both of Ravel's, Prokofiev's No. 3, those of Bliss and Khachaturian, and many more), as well as the wide spans demanded by the music of Granados, Albéniz and de Falla. She had a "long fifth finger" and a "wide stretch between thumb and index finger" which helped make her more technically gifted.[3]

As she grew older she began to play a different style of music; more Mozart and Beethoven were featured in her recitals and she became a regular guest at the "Mostly Mozart Festival" of the Lincoln Center for the Performing Arts in New York. In 2001, she was named Honorary Member of the Foundation for Iberian Music at The City University of New York. De Larrocha retired from public performance in October 2003, aged 80, following a 76-year career.[2][4]

Alicia de Larrocha died on 25 September 2009 in Quiron Hospital, Barcelona, aged 86. She had been in declining health since breaking her hip five years previously.[8] Her husband, the pianist Juan Torra, with whom she had two children, died in 1982.[2][3]

This article uses material from the article Alicia de Larrocha from the free encyclopedia Wikipedia and it is licensed under the GNU Free Documentation License.

Francisco Escudero Adagio cantabile aus "Concierto vasco" für Klavier und Orchester
Update Required To play the media you will need to either update your browser to a recent version or update your Flash plugin.