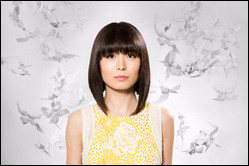 Ott was born in Munich, Germany, in 1988; her Japanese mother had studied piano in Tokyo, and her father was a German civil engineer.[2] She says she realised as a child that "music was the language that goes much beyond any words" and that she wanted to communicate and express herself through music.[3] She started piano lessons when she was four, and reached the final stage of the youth competition in Munich at the age of five, playing to a full house in the Hercules Hall.[3]

She won the Jugend musiziert competition in Germany when she was seven years old.[4]

In 2002 she was the youngest finalist at the Hamamatsu International Piano Competition in Japan where she won the Most Promising Artist award.[1]

From the age of twelve, she studied at the Salzburg Mozarteum with Karl-Heinz Kämmerling [1] while continuing her school education in Munich. Ott has won awards at a number of piano competitions, including first prize at the 2004 Pianello Val Tidone Competition.

Her sister Mona Asuka Ott is also a professional pianist.[5]

Ott has made recordings of Franz Liszt's Transcendental Etudes and Frédéric Chopin's waltzes for Deutsche Grammophon, and performed concert tours in Europe, Japan and the United States.

Ott has a recording contract with Deutsche Grammophon[4] and her recordings include:[1]

This article uses material from the article Alice Sara Ott from the free encyclopedia Wikipedia and it is licensed under the GNU Free Documentation License.

Franz Danzi Ouvertüre zum Singspiel "Camilla und Eugen oder der Gartenschlüssel"
Update Required To play the media you will need to either update your browser to a recent version or update your Flash plugin.