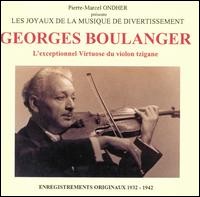 Georges Boulanger was born in Tulcea, Romania from a Romani (Gypsy) Romanian family with a very long tradition in music. His father's name was Vasile Pantazi. He was known as the typical Romanian Romani virtuoso. He learned to play the violin as a child from his father, who was already the sixth generation musician. At the age of 12, Georges Boulanger got a scholarship to study at the Conservatory in Bucharest. Three years later he was heard by Leopold Auer who took him to Dresden with him and where he studied with him for the next two years. Other students of Auer were Jascha Heifetz, Nathan Milstein, and Mischa Elman.

In 1910, when Boulanger was 17 years old, Leopold Auer told him that his musical studies are finished and gave him a violin as a going away present. Boulanger played on this violin until his death. Under the recommendation of Auer, Georges Boulanger received a position of first violinist in the Café Chantant in Saint Petersburg, Russia. This was where many aristocrats frequented. With his "background music", a mixture of Romani music, Balkan folklore and Viennese waltzes he found that many people in the public enjoyed his taste in music. This music is also known as salon music.

It was here in Russia that Georges Boulanger met a young girl from Estonia named Ellionorr Paulson. She was an intellectual student of law and medicine. They eventually got married and had two daughters, Nora and Georgette.

In 1917 Georges Boulanger left Russia and returned to Romania. In 1922/23 he went to Berlin where he played for his old audiences of Russian Aristocrats that now lived in Berlin. In the year 1926, his name suddenly became well-known. Boulanger played in radio transmissions that were broadcast live throughout the country. He played in the most famous houses in Berlin and other large European cities such as the Savoy Hotel in London. He was contracted by the Bote & Bock Edition who published his musical compositions.

His famous Avant de mourir would later be called "My Prayer" and a text by Jimmy Kennedy would be added. It was charted in the number one spot for 21 weeks in 1958 in the USA.

Boulanger lived in Germany from the early 20s until 1948 when he moved to South America. He worked in Brazil then settled in Argentina for the rest of his days.

George Boulanger wrote about 250 compositions. Most of his works last 5 or 6 minutes.

This article uses material from the article Georges Boulanger (violinist) from the free encyclopedia Wikipedia and it is licensed under the GNU Free Documentation License.