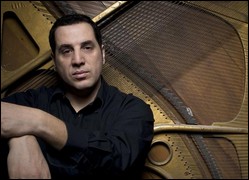 Born in Israel, Yavnai began playing piano at the age of four. He has professionally accompanied singers since the age of thirteen. He graduated from the Thelma Yalin High School for Arts and subsequently the Givatayim Conservatory, both in Israel. Alon later furthered his studies at the Berklee School of Music in Boston, Massachusetts and soon after took first place in the Great American Jazz Piano Competition.

He has taught, being a former faculty member at the Sitka Fine Arts Camp.

In 2008, Yavnai won a Grammy as a part of the Paquito D'Rivera Quintet for Best Latin Jazz Album for Funk Tango. Yavnai wrote the title track.[1] In May 2008, Yavnai released his album Travel Notes which features solo pieces as well as trio pieces (with Omer Avital on bass and Jamey Haddad on percussion).[2]

This article uses material from the article Alon Yavnai from the free encyclopedia Wikipedia and it is licensed under the GNU Free Documentation License.

Johann Sebastian Bach Menuett II und Marsch II aus Notenbüchlein für Anna Magdalena
Update Required To play the media you will need to either update your browser to a recent version or update your Flash plugin.