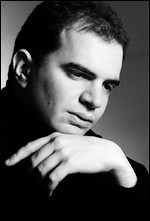 Kirill Gerstein (Russian: ), (born 1979, Voronezh, Soviet Union) is a Jewish American and Russian pianist. He was the First Prize winner at the 2001 Arthur Rubinstein Piano Competition in Tel Aviv. He was chosen to receive a 2002 Gilmore Young Artist Award, and was selected as Carnegie Hall's "Rising Star" for the 2005-2006 season. He became an American citizen in 2003 and is currently a professor of piano at the Musikhochschule in Stuttgart.[1] He is the 2010 recipient of the $300,000 Gilmore Artist Award.

Kirill Gerstein was born to Jewish parents in 1979 in Voronezh (former USSR). At the age of 11, he won his first competition - the International Bach Competition in Gorzów, Poland. After attending the summer program at Berklee College of Music in Massachusetts in 1993, he was invited to attend the college on full scholarship.

He next attended the Manhattan School of Music, where he studied with Solomon Mikowsky, earning both his Bachelor's and Master's of Music degrees by the age of 20. His studies later took him to Madrid with the piano pedagogue Dmitri Bashkirov and Claudio Martínez Mehner at the Queen Sofía College of Music. He also was one of only six pianists selected to study in 2003 and 2004 at the International Piano Academy Lake Como.

Kirill Gerstein made his major orchestral debut with David Zinman and the Zurich Tonhalle Orchestra in September 2000. He was immediately re-engaged the following season. He also toured Germany with the Royal Philharmonic Orchestra led by Charles Dutoit and appeared in the London BBC Proms with cellist Steven Isserlis.

Gerstein made his Ravinia Festival concerto debut with the Chicago Symphony Orchestra and Christoph Eschenbach in 2002. He also appeared in recital at the 2002 Gilmore Piano Festival, on Ravinia's Rising Star Series and in the Boston Conservatory's Piano Masters Series.

In January 2010, Mr. Gerstein was announced as the sixth recipient of the $300,000 Gilmore Artist Award.[2] Previous winners of this prestigious award include Leif Ove Andsnes from Norway, Piotr Anderszewski from Poland and Ingrid Fliter from Argentina.

His debut recital recording of works by Bach, Beethoven, Scriabin and Gershwin arranged by Earl Wild was released in 2004 on the Oehms Classics label.

This article uses material from the article Kirill Gerstein from the free encyclopedia Wikipedia and it is licensed under the GNU Free Documentation License.

Antonio Rosetti Allegro maestoso aus dem Hornkonzert Es-Dur
Update Required To play the media you will need to either update your browser to a recent version or update your Flash plugin.