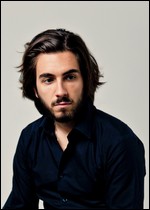 Teo Gheorghiu is a Swiss-Canadian pianist and actor, born on August 12, 1992 in Männedorf in Canton of Zürich, Switzerland from Romanian and Canadian parents.[1][2]

He started playing the piano at the age of 5 with Daniel Höxter.[2] He studied with William Fong at the Purcell School, a music boarding school in London, from 2001 to 2010. [3] He studied with Gary Graffman at the Curtis Institute of Music in Philadelphia, and currently studies at the Royal Academy of Music.[5]

He made his first public concert performance in 2004 in Zürich Tonhalle with Robert Schumann's Piano Concerto (where the footage for the final scene of the film was recorded live).[3] In May 2007 his interpretation of Sergei Rachmaninoff's Piano Concerto No. 2 with the Orchester Musikkollegium Winterthur was acclaimed.[3] The same year he gave concerts with the Tokyo New City Orchestra, the Zürich Chamber Orchestra (dir. Muhai Tang) and the Berne Symphony Orchestra. In 2008 he played concerts in Tokyo, Istanbul, London, Saint Petersburg and Potsdam.[6] In 2009 he toured in Zürich, Gstaad,[7] and also in Harrogate, Bad Saarow, Bucharest, Bonn, China and Taiwan.[6]

This article uses material from the article Teo Gheorghiu from the free encyclopedia Wikipedia and it is licensed under the GNU Free Documentation License.

Friedrich von Flotow "M'appari" aus der Oper "Martha"
Update Required To play the media you will need to either update your browser to a recent version or update your Flash plugin.