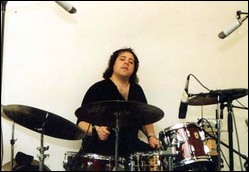 Ken Serio is a session drummer from Rhode Island. A drummer since the age of 11, he moved to New York City to pursue the craft professionally, studying with Joe Morello and Kenwood Dennard, among others. He currently resides in northern New Jersey, teaching dozens of students weekly.

His five original albums are distributed through Serio's own label, Tripping Tree

With others: session work

This article uses material from the article Ken Serio from the free encyclopedia Wikipedia and it is licensed under the GNU Free Documentation License.