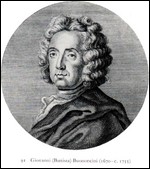 Giovanni Battista Bononcini [or Buononcini][1] (18 July 1670 9 July 1747) was an Italian Baroque composer and cellist, one of a family of string players and composers.

Bononcini was born in Modena, Italy, the oldest of three sons. His father, Giovanni Maria Bononcini (1642-1678), was a violinist and a composer, and his younger brother, Antonio Maria Bononcini, was also a composer. Giovanni Battista studied the cello in Bologna. He then served as maestro di cappella at San Giovanni in Monte and afterwards worked in Milan, Rome, Vienna and Berlin.

From 1720 to 1732 he was in London, where for a time his popularity rivaled George Frideric Handel's, who had arrived in London in 1712. The tories favored Handel, while the whigs favored Bononcini.[1] Their competition inspired the epigram by John Byrom that made the phrase "Tweedledum and Tweedledee" famous. Handel steadily gained the ascendancy, and Bononcini became a pensioner of the Duchess of Marlborough, who had led his admirers.[1] Bononcini left London after charges of plagiarism were proven against him: he had palmed off a madrigal by Antonio Lotti as his own work.[2]

He remained for several years in France, and in 1748 was summoned to Vienna to compose music in honour of the Peace of Aix-la-Chapelle. He then went to Venice as a composer of operas.[2] He died in poverty in Vienna, leaving behind a wife and 4 children.

He published his earliest works for the cello. His other works include a number of operas, masses, and a funeral anthem for the Duke of Marlborough. One of his operas, Xerse, parodied material in an earlier setting of that opera by Francesco Cavalli. This included the aria "Ombra mai fu". Bononcini's Xerse was in turn later adapted by Handel with a third (and best known) version of "Ombra mai fu". His song Vado ben spesso cangiando loco was used by Liszt in his suite for piano Années de pèlerinage: Deuxième année: Italie.

This article uses material from the article Giovanni Battista Bononcini from the free encyclopedia Wikipedia and it is licensed under the GNU Free Documentation License.