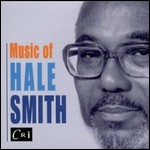 Born in Cleveland, Ohio, Smith studied at the Cleveland Institute of Music, graduating with a B.M. degree in 1950, and obtaining an M.M. in 1952. There, his instructors included Marcel Dick (composition), Ward Lewis (theory), Dorothy Price (piano), and Robert U. Nelson (calligraphy). In 1953 Smith's opera Blood Wedding premiered in Cleveland.

He moved to New York in 1958 and taught at C. W. Post College on Long Island, New York until 1970. He later taught at the University of Connecticut.

His awards include the first composition prize of BMI Student Composer Awards sponsored by Broadcast Music, Inc. (1952), the Cleveland Arts Prize (1973), and membership in the American Academy of Arts and Letters (1988).

He received an honorary doctorate from the Cleveland Institute of Music in 1988.

"Hale Smith Day" was declared for February 21, 2010 by the Honorable Andrew Hardwick, Mayor of the village of Freeport, at a concert given in Smith's honor at the South Nassau Unitarian Universalist Congregation. The congregation, located in Freeport, has a Hale Smith Day concert each February in conjunction with the Long Island Composers' Alliance.

This article uses material from the article Hale Smith from the free encyclopedia Wikipedia and it is licensed under the GNU Free Documentation License.