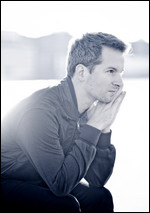 Bertrand Chamayou (Toulouse, 23 March 1981) is a French pianist.[1] Studied at the Conservatoire de Toulouse under the tutelage of Claudine Willoth, making his first forays into contemporary music and composition. At the age of 15, with the encouragement of pianist-conductor Jean-François Heisser, Chamayou continued his studies at the CNSM de Paris.

At the same time, he began to work with Maria Curcio in London, receiving advice from such mentors as Leon Fleisher, Dmitri Bashkirov and above all Murray Perahia, who "has left a profound mark" on him. In 1998, he became laureat of the Kraïnev Piano Competition in Ukraine, going on to win the International Long-Thibaud-Crespin Competition at the age of 20.

Chamayou has since established himself at the highest level on the international music scene, performing in venues such as the Théâtre des Champs-Élysées, Lincoln Center, the Herkulessaal Munich and London’s Wigmore Hall.[2] He has appeared at major festivals including New York’s Mostly Mozart Festival, the Lucerne Festival, Edinburgh International Festival, Rheingau Musik Festival, Beethovenfest Bonn and Klavier-Festival Ruhr.

In the 2015/16 season, Bertrand Chamayou made his debuts with the Gewandhaus Orchester Leipzig, Konzerthaus Orchester Berlin, Cinncinati Symphony Orchestra, Wiener Symphoniker and Orquestra Sinfônica do Estado de São Paulo.[3] He is the only artist to have received the French Victoire de la Musique Classique award three times, most recently in the category of Instrumental Soloist in 2016[4] (previously 'Revelation of the Year, Solo Instrumentalist' in 2006, and 'Recording of the Year' in 2012).

An exclusive Erato recording artist, in 2016 he released a double-album on that label of the complete works for solo piano of Maurice Ravel, recorded in his hometown of Toulouse and hailed in Gramophone magazine for "revelatory performances of breathtaking beauty".

Although perhaps best known for his interpretations of Romantic music, Chamayou is equally 20th- and 21st-century music, having worked with composers including Henri Dutilleux, Pierre Boulez, Karol Beffa and György Kurtag, and performing the piano concertos of Thomas Adès and Esa-Pekka Salonen at the Présences Festival.

Chamayou is a regular chamber music performer, with partners including Renaud and Gautier Capuçon, Quatuor Ebène, Antoine Tamestit, Vilde Frang and Sol Gabetta, among others.

He became a Chevalier of the Ordre des Arts et des Lettres in 2015.[5]

This article uses material from the article Bertrand Chamayou from the free encyclopedia Wikipedia and it is licensed under the GNU Free Documentation License.

Pjotr Iljitsch Tchaikovsky Klavierkonzert Nr. 1 b-moll op. 23
Update Required To play the media you will need to either update your browser to a recent version or update your Flash plugin.