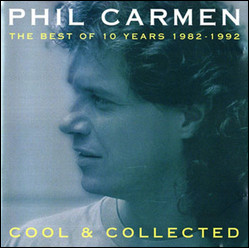 Carmen grew up in Frankfurt am Main, Germany and in Lucerne, Switzerland. In Lucerne, he went to the Conservatory, but later studied bookkeeping. In 1975, he decided to turn to music. With bassist Mike Thompson (born Marcel Galuzzi), he founded the duo Carmen & Thompson, playing especially country music. The single "Time Moves On" reached #31 on the Italian charts in 1980, and in 1981 they appeared at the San-Remo-Festival performing the song "Follow Me".

After seven years of stage experience Phil Carmen founded the Picar Studios in Stein am Rhein, Switzerland in 1982 and recorded two solo albums which attracted little attention until 1985, when he had a hit with the LP Walkin' the Dog, which reached #3 in the Swiss charts. The single "On My Way to LA" was his greatest success and climbed in the summer of 1985 to #18 in Germany[1] and #9 in Switzerland. "On My Way to LA" was also used in the television series Wild West in 1988. His 1986 album Wise Monkeys hit #1 on the Swiss charts, while the single "Moonshine Still" reached #10. His last successful album as a solo artist was City Walls (1987), which went to #10 in Switzerland. The corresponding promotional tour led to the Live in Montreux album with the same band line up of Brian Auger on organ, Pick Withers and Larry E. Van on drums, Dick Morrissey on sax, Steve Dawson on trumpet, Steve Evens on bass, and Sabine van Baaren, backing vocals.

This article uses material from the article Phil Carmen from the free encyclopedia Wikipedia and it is licensed under the GNU Free Documentation License.