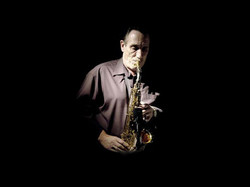 Peter King was born in Kingston upon Thames, Surrey, on August 11, 1940. He took up the clarinet and saxophone as a teenager, entirely self-taught. His first public appearances were in 1957, playing alto in a trad jazz group at the Swan Public House, Kingston, in a group organised by trumpeter Alan Rosewell, with whom he worked at the Directorate of Overseas Surveys as an apprentice cartographer. After the performance, however, King made the choice of becoming a professional musician.

In 1959, at age nineteen, he was booked by Ronnie Scott to perform at the opening of Scott's club in Gerrard Street, London. In the same year he received the Melody Maker "New Star" award. He worked with Johnny Dankworth's orchestra from 1960 to 1961, and went on to work with the big bands of Maynard Ferguson, Tubby Hayes, Harry South, and Stan Tracey, the Brussels Big Band, and the Ray Charles band on a European tour. He has also played in small groups with musicians such as Philly Joe Jones, Zoot Sims, Al Cohn, Red Rodney, Hampton Hawes, Nat Adderley, Al Haig, John Burch, Bill Watrous, and Dick Morrissey, Tony Kinsey, Bill Le Sage and singers such as Jimmy Witherspoon, Joe Williams, Jon Hendricks, and Anita O'Day. He is a member of Charlie Watts' Tentet.

King's composing, deeply influenced by the music of Béla Bartók, has moved far beyond individual numbers for performance and recording, and includes an opera, Zyklon, in collaboration with Julian Barry. On his album Janus he presented a five movement suite for jazz quartet and string quartet, for which he wrote all the music, using the arch form familiar in classical composition. He has also made appearances on a number of pop duo Everything But The Girl's albums, as well as on the solo album North Marine Drive of Everything But The Girl member Ben Watt. There have also been a few film appearances such as in, Blue Ice, starring Michael Caine, and The Talented Mr. Ripley, starring Mat Damon.

In 2005 Peter King won the BBC 'Musician of the Year' award.

As of 2011, King still performs regularly in jazz venues around London and the rest of the UK with his quartet, usually featuring pianist Steve Melling, and as a guest performer in other jazz bands.[1] In April 2011 he published his autobiography Flying High.

Peter King is widely regarded as one of the world's best altoists. "A wonderful musician, Peter King is a master of his instrument. People are aware of that here in America as well as in England" (Elvin Jones, Jazz UK Magazine. September 2001). His playing on soprano saxophone is no less distinctive and powerful, and King often uses the instrument to express the more lyrical side of his music.

He is also a leading figure in the international aero-modelling world. He has competed successfully in major competitions and has written extensively about the subject. Among his other strong interests has been Formula One motor racing and his album Tamburello contains a three-part composition which presents a deeply felt tribute to the late Ayrton Senna.

In 2012, King appeared in the documentary film, No One But Me, discussing jazz musician Annie Ross.[2]

After playing a Selmer Mark VI alto saxophone[3] for many years, around 2001 he changed to a limited edition Yanagisawa A9932Z solid silver and phosphor bronze alto,[4] fitted with the same vintage metal Otto Link mouthpiece as before. His limited edition A9932Z is no longer produced by Yanagisawa, although the newer A9932J alto saxophone[5] is almost identical to it, except that the inside of the solid silver bell is not gold-plated and there are some minor differences in the engraving. In 2010, King is still playing the custom Yanagisawa alto, but with a metal mouthpiece hand-made by Freddie Gregory.[6]

This article uses material from the article Peter King (saxophonist) from the free encyclopedia Wikipedia and it is licensed under the GNU Free Documentation License.