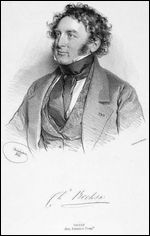 The son of a Bohemia-born musician Karl Bochsa (de), Nicolas-Charles Bochsa was able to play the flute and piano by the age of seven. In 1807 he went to study at the Paris Conservatoire. He was appointed harpist to the Imperial Orchestra in 1813, and began writing operas for the Opéra-Comique. However, in 1817 he became entangled in counterfeiting, fraud, and forgery, and fled to London to avoid prosecution. He was convicted in absentia, and sentenced to twelve years hard labour and a fine of 4,000 francs.[2]

Safe from French law in London, he helped found the Royal Academy of Music in 1821, and became its secretary. He taught there, amongst others, the British harp virtuoso Elias Parish Alvars. When his criminal conviction was revealed in 1826 he was forced to resign. He then became Musical Director of the Kings Theatre in London.

In 1839 he became involved in another scandal when he ran off with the opera singer Anna Bishop, wife of the composer Henry Bishop. They performed together in North America and throughout Europe (except France). In Naples Bochsa was appointed Director of the Regio Teatro San Carlo, (the Royal Opera House) and stayed there for two years.

Bochsa arrived with Anna Bishop in Sydney, at the time of the gold rush in December 1855, but they gave only one concert together before Bochsa died. Bishop was heartbroken, and commissioned an elaborate tomb for him in Camperdown Cemetery, Sydney.

This article uses material from the article Nicolas-Charles Bochsa from the free encyclopedia Wikipedia and it is licensed under the GNU Free Documentation License.

Carl Philipp Emanuel Bach Oboenkonzert Es-Dur
Update Required To play the media you will need to either update your browser to a recent version or update your Flash plugin.