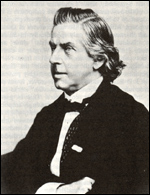 Niels Wilhelm Gade (22 February 1817 – 21 December 1890) was a Danish composer, conductor, violinist, organist and teacher. He is considered the most important Danish musician of his day.

Gade was born in Copenhagen, the son of a joiner and instrument maker. He began his career as a violinist with the Royal Danish Orchestra, and saw his concert overture Efterklange af Ossian ("Echoes of Ossian") premiered with them in 1841. When his first symphony was turned down for performance in Copenhagen, he sent it to Felix Mendelssohn. Mendelssohn received the work positively, and conducted it in Leipzig in March 1843, to enthusiastic public reaction. Supported by a fellowship from the Danish government, Gade himself moved to Leipzig, teaching at the Conservatory there, working as an assistant conductor of the Gewandhaus Orchestra, and befriending Mendelssohn, who had an important influence on his music. In 1845 he conducted the premiere performance of Mendelssohn's Violin Concerto in E minor. He also became friends with Robert Schumann In Copenhagen Niels Gade became acquainted with the composer Cornelius Gurlitt, and they remained friends until the latter's death..

At Mendelssohns death in 1847, Gade was appointed to his position as chief conductor but was forced to return to Copenhagen in the spring of 1848 when war broke out between Prussia and Denmark.

In Copenhagen Gade became director of the Copenhagen Musical Society (a post he retained until his death) and, establishing a new orchestra and chorus, settled in to a career as the most prominent musician in Denmark. Under his direction, the Music Society reached its peak. He also worked as an organist; though he lost the prestigious position of organist at Copenhagen Cathedral to J.P.E. Hartmann, he served in the Church of Holmen in Copenhagen from 1850 until his death. Gade was joint director of the Copenhagen Conservatory with Hartmann (whose daughter he married in 1852) and Holger Simon Paulli. An important influence on a number of later Scandinavian composers, he encouraged and taught both Edvard Grieg and Carl Nielsen, as well as lesser figures such as Otto Malling, August Winding and Asger Hamerik. He died in Copenhagen.

Among Gade's works are eight symphonies, a violin concerto, chamber music, organ and piano pieces and a number of large-scale cantatas, Comala (1846) and Elverskud (1853) amongst them, which he called koncertstykker ("concert pieces"). These products, embraced post-1848 as works of Romantic nationalism,[1] are sometimes based on Danish folklore. Apparently Gade never rated "Brudevalsen" (The Bridal Waltz), and assigned it to the waste paper basket from where, it is rumoured, it was rescued by August Bournonville, to become an essential part of a Danish wedding.

He married Emma Sophie Amalie Hartmann, daughter of J. P. E. Hartmann, in 1852. He remarried in 1857 after her death.

This article uses material from the article Niels Gade from the free encyclopedia Wikipedia and it is licensed under the GNU Free Documentation License.