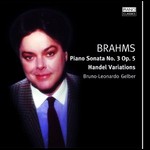 Gelber was born in Buenos Aires, of Austrian and French-Italian descent.[1] His father was a violinist, his mother a pianist.[2] He made his first public appearance at age 5, and at age 6 commenced studies with Vincenzo Scaramuzza (the teacher of Martha Argerich).[2] He was confined to bed for a year with poliomyelitis from age 7, but made his formal recital debut at age 8.[1] He retains a slight limp but does not need crutches.[2]

When he was aged 15, he played the Schumann Concerto under Lorin Maazel. At age 19 he went to Paris to study under Marguerite Long, and the following year he won 3rd Prize in the Long-Thibaud Competition.[1]

Gelber's career since then has taken him all over the world, and he has appeared with many of the world's great orchestras and conductors. He has made many recordings, including the complete sonatas of Beethoven. He specialises in the Classical and Romantic repertory, but came late to Rachmaninoff, due to the stubbiness of his fingers.[2]

He resides in Monte Carlo.[2]

This article uses material from the article Bruno Leonardo Gelber from the free encyclopedia Wikipedia and it is licensed under the GNU Free Documentation License.

Wolfgang Amadeus Mozart Kassation für Orchester G-Dur KV 63
Update Required To play the media you will need to either update your browser to a recent version or update your Flash plugin.