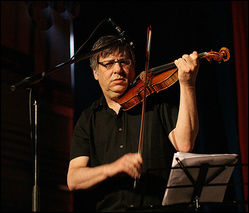 Mark Feldman (born 1955 in Chicago) is an American jazz violinist.

Feldman worked in Chicago from 1973 to 1980, and in Nashville, Tennessee from 1980 to 1986. He worked in New York City and Western Europe from 1986. Feldman often works with John Zorn, Sylvie Courvoisier, John Abercrombie, The Masada String Trio, Dave Douglas, Uri Caine, and Billy Hart. He has played on recordings by Michael Brecker, Lee Konitz, Joe Lovano, and Chris Potter. At New York's Lincoln Center he played in duo with pianists Paul Bley and Muhal Richard Abrams. In 2010 Feldman Released two Recordings. "Oblivia" a duo recording of original music with pianist/composer Sylvie Courvoisier on Tzadik Records. "To Fly To Steal" with the Mark Feldman/Sylvie Courvoisier Quartet Featuring Bassist Thomas Morgan And Drummer Gerry Hemmingway on The Swiss Label Intakt. In 2006, Feldman's recording What Exit was released on ECM,which featured British Pianist John Taylor. In 1995 he released Music for Violin Alone, a collection of his Improvisations for Solo Violin, on Tzadik Records. In 2000 he released Book of Tells on Enja Records, a recording of his compositions for string quartet.

He has played on over 100 recordings in New York City as a soloist in contemporary music and modern jazz.

In September 2012, Feldman co-produced with violinist Jean-Luc Ponty, the debut album of Scott Tixier by writing the liner notes for the release on Sunnyside Records.

Feldman is married to the Swiss pianist Sylvie Courvoisier.

With The Chromatic Persuaders

This article uses material from the article Mark Feldman from the free encyclopedia Wikipedia and it is licensed under the GNU Free Documentation License.