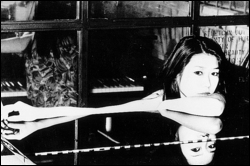 Raised in Tokyo, she studied music at Tohogakuen Music University.[1] Starting in 1978, she performed and recorded in the USA with Lester Bowie, David Liebman, John Zorn and others. Since 1981, she performed repeatedly at the Berlin Jazz Festival in Germany.

For many years, she has been working with her husband[2] Alexander von Schlippenbach, Eugene Chadbourne, Han Bennink, Evan Parker, Paul Lovens, Fred Frith and others, and in duets with Maria João, David Murray and Rudi Mahall.

This article uses material from the article Aki Takase from the free encyclopedia Wikipedia and it is licensed under the GNU Free Documentation License.

Muzio Clementi 1. Satz aus der Sinfonie Nr. 2 D-Dur
Update Required To play the media you will need to either update your browser to a recent version or update your Flash plugin.