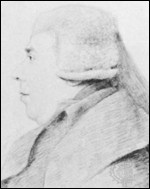 Arnold was born in London (his mother is said to have been Princess Amelia; his father was Thomas Arnold), and began writing music for the theatre in about 1764. A few years later he became director of music at the Marylebone Gardens, for which much of his popular music was written. In 1777 he went to work for George Colman the Elder at the Little Theatre, Haymarket. In 1783 he became organist at the Chapel Royal, and in 1793 he became organist at Westminster Abbey, where he was eventually buried.

He is also known for producing the first collected edition of the works of George Frideric Handel between 1787 and 1797, published in 180 parts. This was the most comprehensive collection of Handel's music prior to the appearance of the Händel-Gesellschaft edition in the next century.[2]

This article uses material from the article Samuel Arnold (composer) from the free encyclopedia Wikipedia and it is licensed under the GNU Free Documentation License.

Johann Carl Eschmann Salon-Etude aus "Was einem in der Dämmerung so einfällt. 12 charakteristische Tonbilder" op. 8
Update Required To play the media you will need to either update your browser to a recent version or update your Flash plugin.