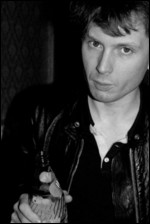 Alex Kapranos was born in Almondsbury, Gloucestershire, England to an English mother and Greek father.[3] He moved to Scotland at the age of seven, attending primary school in Edinburgh and high school in Bearsden, a suburb of Glasgow.[4] At the age of 17, Kapranos attended the University of Aberdeen to study Theology. After dropping out, he continued his studies at the University of Strathclyde, eventually gaining a BA. In 2005, he was awarded Strathclyde's Alumnus of the Year.[5] He worked as a chef, barman, music promoter, driver, welder and lecturer prior to finding fame with Franz Ferdinand.[6]

From the early 1990s, he was a fixture of the Glasgow music scene, running live nights at the 13th Note, most notably The Kazoo Club. While working as a chef, bartender, lecturer in IT at the city's Anniesland College, and other various jobs, he played in some of Glasgow's popular bands, including The Blisters (later known as The Karelia), The Amphetameanies, and The Yummy Fur. He is also known to have contributed to the noise act Urusei Yatsura and Lungleg recordings.[2]

After dropping "Huntley" from his name, he formed Franz Ferdinand in 2001. The band is composed of Alex Kapranos, Nick McCarthy (guitar, keyboard, backup vocals), Paul Thomson (drums, backup vocals, sometimes guitar) and Bob Hardy (bass). The band saw chart success after their second single Take Me Out (released 12 January 2004)[7] reached Number 3 in the UK Charts[8] followed by their debut album Franz Ferdinand (released 9 February 2004)[9] which debuted on the UK album chart at Number 3.[10]

In September 2005, Kapranos began "Soundbites",[13] a weekly food column for G2 in the Guardian newspaper, which detailed his culinary adventures as Franz Ferdinand traversed the globe on their world tour. Sound Bites: Eating on Tour with Franz Ferdinand, a book of the column and unreleased material illustrated by Andy Knowles was released in 2006.

Sound Bites: Eating on Tour with Franz Ferdinand was read by Kapranos on BBC Radio 4's Book of the Week for 48 December 2006, described as "his account about what he ate while touring the world."[14]

Kapranos makes a cameo appearance in the video for Our Bovine Public.[15]

His remix of the single, "New in Town", by British pop singer Little Boots was featured on various formats of the singles release.

He produced the debut album by British indie rock band Citizens! '"Here We Are'", which was released by Kitsuné on 28 May 2012.[16]

When not on the road, using his leather "jump rope",[17] recording in the studio,[18] Kapranos spends time in his carpentry workshop, crafting abstract furniture.[19]

Also in 2008, Kapranos narrated the BBC Radio One documentary The Story of Kraftwerk.

This article uses material from the article Alex Kapranos from the free encyclopedia Wikipedia and it is licensed under the GNU Free Documentation License.