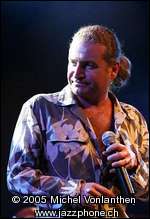 Leonid Nikolayevich Agutin (Russian: ; b. July 16, 1968) is a Russian pop musician and songwriter. He has been active since the 1990s. He has released eight albums and three compilation albums.

Agutin was born in Moscow in July 16, 1968. His father was Nikolai Petrovich Agutin, a musician, and his mother was Lyudmila Leonidovna Shkol'nikova, an elementary school teacher. His father was a singer in the Soviet band VIA "Golubiye Gitary" (Blue Guitars) and worked as a manager for the popular Soviet musical groups "Veseliye Rebyata" (Happy Kids), "Poyuschiye Serdtsa" (Singing Hearts), and "Pesniary" (Songsters).

Along with receiving a regular school education, the young Agutin also completed a course of musical study on the piano at the Moscow Jazz school "Moskvorechie".[1] He later served in the army on the RussiaFinland border.[2]

In 1991, Agutin began to tour former Soviet republics as an opening act for other performers. Two years later, he graduated from the Moscow State Institute of Culture. In 1997, Agutin married the stage performer Anzhelika Varum, his second marriage.[1]

Agutin has two daughters, Elisaveta with Varum, and Polina with the Russian ballerina Maria Vorobyeva. Away from music, he enjoys collecting crosses and playing billiards. He is also a self-avowed believer in the predictions of astrologists.[2]

In 1991, Agutin started touring the Soviet Union with a musical act. He took part in and won the 1992 Yalta international pop music contest, and also won a similar contest in Jrmala in 1993. Agutin released his first solo album, Bosonogiy Malchik ("Barefoot Boy") in 1994, which was a success and launched his career.[1] The album ascended the charts and he won Russian Grammy awards for "Singer of the Year", "Song of the Year", and "Album of the Year". The album included the hits "Hop hey, la la ley" and "Golos visokiy travy" (Sound of the Tall Grass). In 1995, Agutin released his second album, titled "Dekameron". It was another commercial success and, along with Philipp Kirkorov, Valeriy Meladze, and Lubeh, Agutin became one of the most successful recording artists in Russian Grammy balloting.

Agutin released the album Cosmopolitan Life with the guitarist Al Di Meola in 2005, which gained success and worldwide recognition as a result of the Montreux Jazz Festival.

Following the festival, the Austrian directors Hannes Rossacher and Rudy Dolesai made a documentary about the lives of Agutin and Di Meola, called Cosmopolitan Live, released in February 2008.[3]

This article uses material from the article Leonid Agutin from the free encyclopedia Wikipedia and it is licensed under the GNU Free Documentation License.

Luigi Boccherini Rondo quasi Menuetto aus Konzert für Cello und Streicher G-Dur
Update Required To play the media you will need to either update your browser to a recent version or update your Flash plugin.