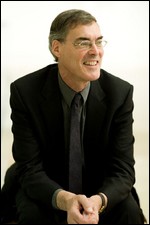 He lists Gerald Moore as his inspiration for pursuing a career in accompaniment.[1] He read music at Magdalene College, Cambridge, then joined the Royal Opera House as a repetiteur before completing his training with Paul Hamburger. He is widely recorded and generally regarded as one of the foremost piano accompanists alive today.

Roger Vignoles has devised and directed several series at the Queen Elizabeth Hall and Wigmore Hall in London, most notably Landscape Into Song for the Schubert bicentennial, and since 1998, he is artistic director of the Nagaoka Festival in Japan. His discography contains several recordings which have received international awards. He first studied at Magdalene College (Cambridge) and the Royal College of Music, where he is now Prince Consort Professor of Piano accompaniment.

Vignoles was born in Cheltenham, the son of Keith Hutton Vignoles TD (1905-1991) and Phyllis Mary née Pearson (1907-1994); he is the great-great grandson of Charles Blacker Vignoles. Roger's son Will Vignoles is a member of the British indie band Cajun Dance Party on XL records.

This article uses material from the article Roger Vignoles from the free encyclopedia Wikipedia and it is licensed under the GNU Free Documentation License.