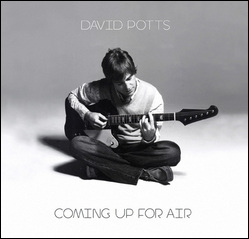 David Potts (born 15 July 1970 in Farnworth, Lancashire, UK), known to bandmates and fans as "Pottsy", is the ex-frontman of Monaco.

In the early 1990s, Potts was working as a tape operator during recording sessions for Peter Hook's Revenge. After the departure of Davyth (Dave) Hicks in 1991, Potts was unexpectedly drafted into the band. Revenge eventually fell apart, with Hook and Potts being the only members left. They continued on as a two-piece, Monaco, with Hook on bass guitar and vocals, and Potts on drums, guitar, keyboards, vocals, and sometimes backing Hook on bass. They recorded the hit "What Do You Want From Me" in 1997, which reached No.11 on the British music charts. The album Music For Pleasure also reached No.11 and produced two more singles, "Sweet Lips" (which reached #18) and "Shine" (which did not chart). After three years of frustration with their record company, Polydor Records, Monaco's self-titled follow-up was released on a different label, and despite severe underpromotion and lack of a strong single, received generally good reviews.

Around this time, tensions were mounting in the studio, due to Potts' unbelievable workload and his dissatisfaction with the band's failure to depart from a New Order-like sound a similarity further highlighted by Potts' remarkable vocal similarity to Bernard Sumner. This was highlighted by what Potts called "a disastrous gig" at the Eclipse festival, where Hook and Potts were in a massive argument. They both took a break, and after letting things cool down, got together and decided it was best to split up Monaco.

Around this time, Oasis rhythm guitarist Paul Arthurs and bassist Paul McGuigan had departed from the band, and Potts was found on the shortlist of possible replacements for McGuigan due to his connection with one of the band's roadies. Briefly contacted by Noel Gallagher, Potts rehearsed with the band on bass. Andy Bell was eventually selected as McGuigan's replacement. Potts later said that although the band was "a charming bunch of lads", he wanted to be his own boss, and did not pursue the position for two reasons: a fear of getting sacked in a matter of weeks (something Oasis is notable for), and a general distaste for playing the bass guitar.

Potts then formed RAM, a nod to McCartney, with friends Steve Brannan and Paul Kehoe receiving lots of positive press for their psychedelic-influenced pop/rock sound. Their Songs on Page One EP and single 'For Your Love' were critically acclaimed.

Pottsy released an EP I'm The Greatest in November 2006, followed by a new album 'Coming Up For Air' in January 2007 under the name David Potts. He also participated in the New Order tribute album project Community 2: A NewOrderOnline Tribute.

His solo album, entitled Coming Up For Air, was released 29 January 2007 with double A-side single 'Monkey in the Rain / Roll Up!' due for release in August 2007.

October 2007 saw the reformation of Monaco for a special one-off gig for the Oxfam charity.

Coming Up For Air was released in Japan in February 2008 on Kaffrec Records and was supported by two concerts in Tokyo.

2011 will see Pottsy putting together a new collection of songs for a new project. According to one source, a total of 16 new tracks have been recorded with all instrumentation, production and writing done by Pottsy himself.

In July 2011 Pottsy was re-united, albeit briefy, with Hooky for a short series of gigs as guitarist for Joy Division celebration band, Peter Hook & The Light, taking in gigs in Italy, Ireland and France. Potts became a full member on 2013.

This article uses material from the article David Potts from the free encyclopedia Wikipedia and it is licensed under the GNU Free Documentation License.